It seems that there is a betting favorite to score the combo of Lebron James and his son Bronny in the 2024 NBA season.

James made headlines in February when he told media members at the NBA All-Star game that aside from winning more championships, he has one other major goal left in his storied basketball career. To eventually play a season in the NBA with his son Bronny.

“My last year will be played with my son,” James told The Athletic last month. “Wherever Bronny is at, that’s where I’ll be. I would do whatever it takes to play with my son for one year. It’s not about the money at that point.”

The Los Angeles Lakers superstar’s eldest son is currently a 17-year-old junior in high school and hasn’t even given any indication of which college basketball program he will play for, yet there are already various projections of where his playing career may lead.

Even before his father’s recent comments, Bronny was projected as a late first or even second-round pick when he would be eligible for selection in the 2024 NBA draft. That could certainly change by competing under the tutelage of an elite NCAA coaching staff in the next few years.

Whatever round he ends up being drafted in — assuming he does come out that year — there are already betting odds on the team that is likely to land Lebron’s son, and eventually “The King” soon after. Betting site Bookies.com currently has the Oklahoma City Thunder as a +800 favorite to draft Bronny James. 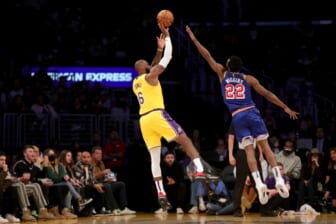 Following the Thunder are the Sacramento Kings at +1200, the Cleveland Cavaliers (how ironic would that be?) at +1500, and then the Golden State Warriors at +1850.

The Thunder currently have the fourth-worst record in the NBA at 20-46. The team could very well draft a franchise player over the next few years and change their odds well before 2024.