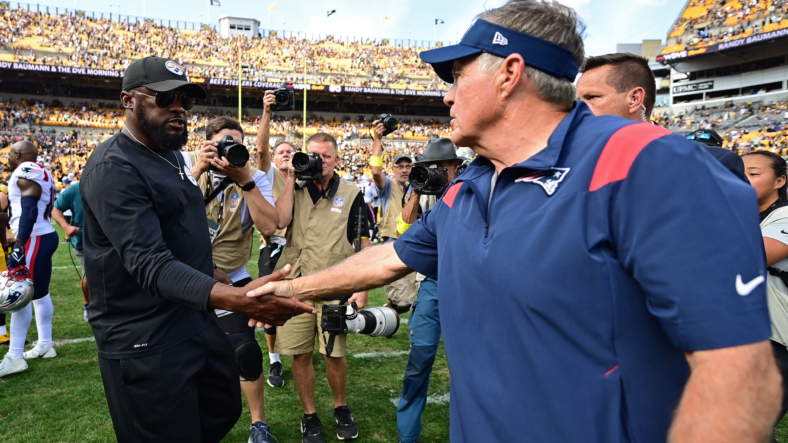 Watching the Pittsburgh Steelers is like having a weekly colonoscopy. They are a team that lives in their fears, and seemingly can’t get out of the same funks week in and week out.

After a 17-14 loss in their home opener to the New England Patriots, Pittsburgh has a lot to clean up on a short week before they travel to Cleveland for a Thursday night matchup with the Browns. Here are our immediate thoughts after the loss.

To quote “Motionless In White,” every canvas that the Steelers paint is a masterpiece of Matt Canada’s mistakes. We can talk all we want about how Mitch Trubisky was the wrong guy to bring in, and that his play is a big reason for the offensive struggles- those are both justifiable statements. However, it’s violently clear that the larger issue is Canada and his play-calling.

Twice, the Steelers faced a 3rd-and-8, and both times resulted in a three-step drop and quick throw to a running back in the flat who was at the line of scrimmage. Jaylen Warren was the recipient of one pass, Najee Harris the other. These are the same types of play calls we saw last season with Ben Roethlisberger.

A lot of fuss was made about Trubisky’s ability to move and extend plays to open up Canada’s offense, but the look hasn’t changed. First down run, second down short gain, third down incompletion, punt has been the story for a lot of the Steelers’ drives early on. That’s not to say Trubisky is without blame, but the majority of the issues fall on Matt Canada.

Mitch Trubisky is inconsistent for the Pittsburgh Steelers

As already stated, Trubisky isn’t without fault for the loss. There were several passes he made that were overthrown, underthrown, or that just looked rushed when he had time to let the play develop.

The cherry on the underbaked cake was the interception to Patriots defensive back Jalen Mills. The Steelers ran a play-action pass that saw Diontae Johnson run a deep slant from the slot. Trubisky threw it into a mosh pit of Patriots where the ball was deflected and picked off.

It was abundantly clear he pre-determined where he was going with the ball, and it ended up costing the Steelers. Even though they got the ball back shortly after with a Minkah Fitzpatrick interception, they looked poised to score points that could have been the difference between being 2-0 instead of 1-1.

The defense was too conservative

The Steelers defense played scared against a Patriots offense that has no scary weapons. T.J. Watt or not, this defense shouldn’t be carved up by Mac Jones and Jakobi Meyers. They gave way too much cushion all game, especially on third-and-long situations. That conservatism helped New England extend drives, and ultimately win the game. The Steelers’ defense is going to be what keeps them in games, and the lack of efficiency offensively doesn’t help their cause, but this is just a schematic issue that needs to be addressed.

With the Browns a hungry divisional opponent, and the Jets showing sign of life, the Steelers need to clean these issues up. If not, they’ll be staring 1-3 in the face as we head into October.