5 most overrated NFL free agents of 2021 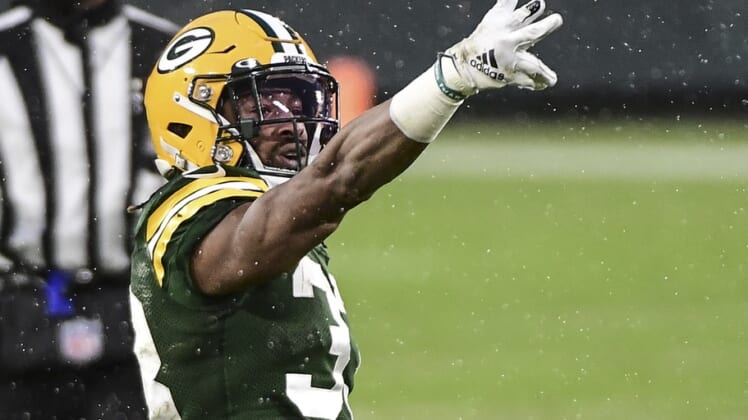 We see it every year around the league. Overrated NFL free agents signing big-money deals, putting teams in salary cap hell in the process.

The Las Vegas Raiders’ decision to release wide receiver Tyrell Williams and defensive back Lamarcus Joyner got us thinking about this. Both signed back in March of 2019, the two veterans were released after just a couple seasons. This came after the Raiders handed them a combined $86-plus million in total contracts.

Heading into the start of free agency around the NFL, there’s a number of well-known players who are going to sign big-time contracts while failing to live up to expectations. Below, we look at the five most overrated NFL free agents of 2021.

Clowney could not have been a bigger bust for the Titans a season ago. He signed a one-year, $13 million contract with Tennessee in September, including a whopping $11.5 million guaranteed at signing. This came after Clowney recorded a combined three sacks with the Seattle Seahawks in 2019.

The former No. 1 overall pick responded by tallying 19 tackles, six quarterback hits and zero sacks for Tennessee. Zero sacks! He was brought on to improve the Titans’ pass rush. That did not happen. Rather, Tennessee finished with a league-low 19 sacks. Despite this, there’s a good chance Clowney will earn $10-plus million annually. That makes him one of the most overrated NFL free agents of the cycle.

It’s mind-blowing to look at. In his first season with the Patriots, Cam Newton recorded a grand total of eight passing touchdowns against 10 interceptions in 15 starts. This is extremely hard to do in a current NFL that benefits the passing game due to the rules. Sure Newton added 12 rushing touchdowns and didn’t have much to work with in terms of skill-position talent. But this has to be concerning.

Now 31 years old, there’s suggestions that the Patriots are considering retaining the former NFL MVP. Whether that’s just being floated about as a tactic to acquire someone like Jimmy Garoppolo on the cheap remains to be seen. What we do know is that Cam has not been the same quarterback since undergoing shoulder surgery. If any team is set to rely on him as a starter-caliber player, said team will be sorely disappointed.

Earlier in his career, the 31-year-old Hilton was among the most-productive receivers in the NFL. From 2013-18, the former mid-round pick averaged 72 receptions for 1,200 yards. He proved to be an absolute steal for Indianapolis coming out of Florida International. Unfortunately, the veteran has hit a proverbial wall since. Over the past two seasons, Hilton has tallied a combined 1,263 yards.

NFL free agency this year is absolutely stacked at wide receiver. JuJu Smith-Schuster, Allen Robinson, Corey Davis and Will Fuller are among those set to hit the open market. Each is years younger than Hilton. Despite this, Spotrac projects the veteran to earn north of $10 million annually. That certainly makes him one of the most overrated NFL free agents of the cycle.

I am not sure what the widespread appeal of Henry is around the league. The former Arkansas standout played under a $10.61 million franchise tag in 2020, recording 60 catches at a clip of 6.6 yards per target. Henry, 26, also has not played a full 16-game schedule since the Chargers made him a second-round pick back in 2016.

Tennessee Titans tight end Jonnu Smith is slated to hit NFL free agency and boasts much more upside. Meanwhile, Pro Bowlers Zach Ertz and Kyle Rudolph are going to be available. What would be the benefit of a team paying Henry north of $10 million per season on the open market? I am not seeing it.

Read More: 4 best running back options for the Miami Dolphins during NFL offseason

To be clear, this has absolutely nothing to do with Jones. He’s among the most-dynamic backs in the NFL. The former fifth-round pick from UTEP has put up 3,017 total yards and 30 touchdowns at a clip of 5.7 yards per touch over the past two seasons. He’s going to get paid by some team around the NFL. Good for him.

With that said, it’s all about a team falling for the narrative that believes running backs should be valued at a high clip in free agency. Teams can find cheaper and younger alternatives via the NFL Draft. Think about it this way. Of the eight running backs who went for over 1,000 yards a season ago, all were on the teams that drafted them. Six were playing under rookie contracts. Jones is slated to get north of $12 million annually. It just doesn’t make sense.