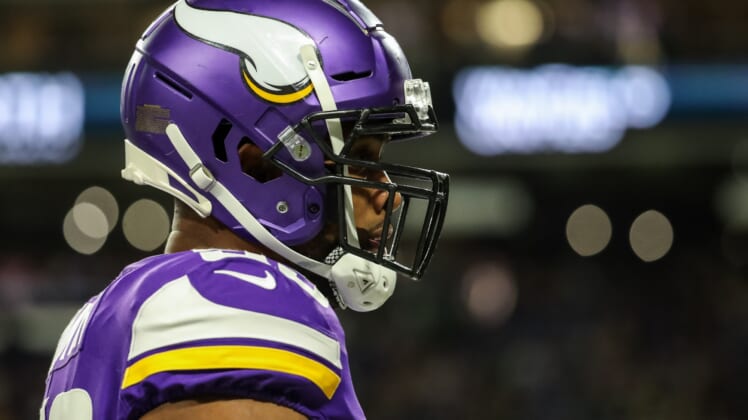 Minnesota Vikings edge rusher Danielle Hunter isn’t happy. After missing the 2020 season, the All-Pro defensive end isn’t pleased with his situation in Minnesota and seemingly could be prepared to pursue a trade.

According to The Athletic’s Chad Graff, the 26-year-old edge rusher isn’t pleased with his contract and is exploring his options. If the Vikings aren’t willing to make him one of the highest-paid pass rushers in the NFL, Hunter is reportedly prepared to hold out and willing to demand a trade.

Given this is the same organization that is strapped for cap space and dealt Stefon Diggs last spring, a trade isn’t out of the question. Minnesota might be hesitant to offer Hunter a huge contract, just three years after signing him to a five-year deal worth $72 million. While the organization recognizes his play has earned a higher salary, missing the entire 2020 season due to a herniated disc is a cause for concern.

So, with Danielle Hunter seemingly prepared to hold out, let’s explore some intriguing trade destinations. Unsurprisingly, given the need for pass rushers across the NFL, there won’t be a shortage of destinations who would happily acquire Hunter and then sign him to the contract he wants.

Before NFL free agency opened, the New York Jets were among the leaders in cap space. With more than $60 million to spend, general manager Joe Douglas planned to go wild. The Jets have needs on both sides of the ball, lacking playmakers on offense and disruptors on the defensive side. But Matthew Judon, Shaq Barrett and Romeo Okwara came off the board almost instantly. Now, Douglas might need to get creative to provide Robert Saleh with a great pass rusher.

That’s where Danielle Hunter comes in. He is an absolute force off the edge when healthy. From 2018-’19, he combined for 41 quarterback hits, 36 tackles for loss and 29 sacks in 32 games. When he last played, Hunter graded as Pro Football Focus’ No. 8 edge rusher in the NFL, better than Myles Garrett, Nick Bosa and Cameron Jordan.

Even with the neck injury, Hunter would have been the most coveted player if he was on the open market. 6-foot-5 edge rushers with this kind of athleticism and production rarely become available, no matter if it’s via trade or free agency. Plus, since the Jets have a ton of draft picks, they might be a great trade partner for Minnesota and Douglas should be willing to fork out the $23-plus million annually Hunter wants.

We know the Colts aren’t afraid to swing blockbuster trades. Just a year ago, general manager Chris Ballard stunned the football world by trading the No. 13 overall pick to the San Francisco 49ers for defensive tackle DeForest Buckner. Minutes after the deal, Buckner signed a multi-year extension worth $21 million per season.

It just so happens that the Colts are in the market for an edge rusher. Conveniently, Indianapolis also has more than $40 million in cap space after acquiring Carson Wentz. Putting Hunter and Buckner, two All-Pro defensive linemen, on the same front would be ridiculous. If Wentz returns to the form we saw in 2019 and Jonathan Taylor becomes a star, this well-rounded team becomes a Super Bowl contender with Danielle Hunter.

The Browns already have one of the NFL’s best pass rushers, but he needs some help. In the playoffs, we saw that Cleveland’s defense struggled to get to the opposing quarterback when teams could throw two or three blockers in Garrett’s direction. That needs to be addressed this offseason and what better way to do it than by landing another defensive force.

Imagine Garrett and Hunter on opposite sides of one another. Opponents will suddenly have to account for two players who combined for 93 total hurries in 2019. Keep in mind, that number isn’t even accounting for the fact that Garrett only played in 10 games. NFL teams aren’t always comfortable with trading a first-round pick and signing that player to a huge contract, a theoretical double cost.

But the Browns want to win a Super Bowl and strengthening the defense is the final step before they make that leap. If Danielle Hunter is available and the No. 26 pick helps land him, Cleveland needs to jump on that opportunity.

The Baltimore Ravens need help along the edge before the 2021 season arrives. Simply put, defensive coordinator Don “Wink” Martindale just doesn’t sleep right at night if his blitz-heavy defense doesn’t have players who terrorize opposing quarterbacks. Judon is gone and Yannick Ngakoue could also be on his way out, leaving two huge holes along the edge.

It’s important to consider, Hunter is a 4-3 defensive end. It’s the position he is most comfortable playing and he is great at it. Making this 6-foot-5, 252-pound edge rusher transition into becoming a standup outside linebacker is taking on a risk. With that acknowledged, he could also thrive with Martindale’s creative mix of formations and personnel, allowing Hunter to face a single blocker in a one-on-one matchup.

There’s another interesting aspect to this trade scenario. Baltimore’s right tackle Orlando Brown Jr. wants out, seeking an opportunity to play left tackle. Following the release of Riley Reiff, that position is an area of need for the Vikings. If the Ravens feel like Danielle Hunter can fit into their defense and they are comfortable signing him, these two teams could be perfect trade partners.