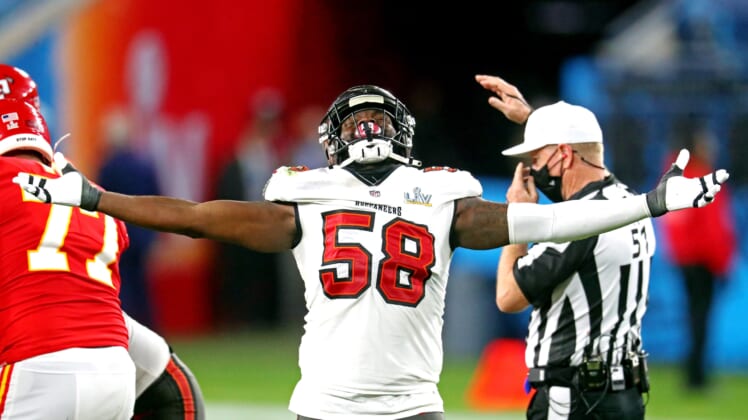 Boasting nearly $70 million to spend under the 2021 NFL salary cap, New York Jets rumors have pointed in the direction of the team being pretty darn active during free agency.

It makes perfect sense with general manager Joe Douglas attempting to change the culture in New Jersey, a ton of needs on both sides of the ball and new head coach Robert Saleh being enticing to defensive free agents.

Sure teams have made the mistake of overpaying for quality players on the NFL free agent market in the past. But the long-downtrodden Jets are not going to sit idly by with this much cap room and allow their roster to remain the least-talented in the league. At least, that’s what we are hearing from Jersey.

“There is absolutely no financial restriction on Douglas this offseason, per sources. He has means and green light to build team however he wants,” Connor Hughes of The Athletic noted. “That means pursuing top-tier FAs and giving them top-tier money, if he wants. Expectation from those around league is #NYJ make waves.”

With needs pretty much all over the field, these Jets can target specific positions and outbid other teams for priority signings. That’s especially true given the lowered 2021 NFL salary cap number due to the revenue downfall created by COVID-19. The Jets are just one of 12 teams with north of $30 million to spend under the cap.

The needs are also pretty darn vast. Running back, offensive line, tight end and wide receiver are all target areas on offense. Meanwhile, a defensive-mined head coach in Robert Saleh will look to put his imprint on that unit.

New York Jets rumors: Who will be the targets on defense?

The expectation has long been that these Jets will look to Saleh’s former 49ers team for scheme fits on defense. That’s good news with the high number of impending free agents coming from San Francisco.

Cornerbacks Richard Sherman, Jason Verrett and K’Waun Williams could make a ton of sense. All three have continued to perform like Pro Bowl-caliber players. Meanwhile, safety Jaquiski Tartt could be an option to team up with Marcus Maye in the defensive backfield.

Big-ticket options such as pass rushers Matt Judon, Yannick Ngakoue and Shaq Barrett also seem like potential options for New York. We saw how young pass rusher Nick Bosa performed under Saleh in San Francisco as a rookie in 2019. The Jets might want to look to duplicate that with a big free-agent signing this week.

Recent New York Jets rumors conclude that they are the leaders in the clubhouse with the division-rival Miami Dolphins for Detroit Lions Pro Bowl receiver Kenny Golladay. He’s likely looking at $15-plus million annually, a number that the Jets could meet due to their cap situation.

JuJu Smith Schuster of the Pittsburgh Steelers and Indianapolis Colts pass-catcher T.Y. Hilton are two other options for the Jets to consider once free agency opens.