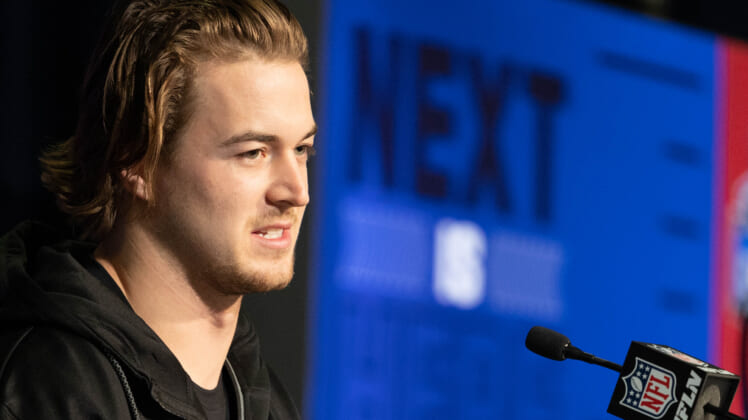 The National Football League is always looking for the next great quarterback, with hope always thrust upon the incoming NFL Draft class. In an offseason with so many teams still in desperate need of a reliable signal-caller, this is seemingly the worst possible time to be hoping for a fix from the draft.

A year ago, North Carolina quarterback Sam Howell and college star Spencer Rattler sat atop mock drafts. Many thought the 2022 class would offer multiple starters, with several drafted in the top-five picks. As the 2022 NFL Draft arrives, the consensus on this year’s crop of passers has changed.

Signs of this started becoming apparent months ago. NFL evaluators were very low on the draft-eligible talent, with some long-time scouts and executives believing there wasn’t a single starting quarterback in the class.

After a prolonged pre-draft process with quarterbacks Kenny Pickett, Malik Willis, Desmond Ridder and many others working out for teams and at the NFL Combine, it seems evaluations still aren’t very favorable.

Go Long’s Bob McGinn spoke to scouts, executives and general managers across the league. While there were some positives about individual prospects, the overall assessment of the class was negative.

“This is the worst group I think I’ve ever done. The only one that has a chance legitimately is (Kenny) Pickett. He’s the only starter. Everybody’s grasping for these guys.”

Pickett, who evaluators graded as the best quarterback available, comes with his own concerns. Teams hesitate to draft a passer who didn’t break out until his fifth year in college, especially when he turns 24 in June and lacks the tools necessary to be a high-end starter.

As for Willis, he’s the biggest gamble among his peers. On his physical talents alone, he merits consideration for the No. 2 pick. However, he’s not ready to be an NFL starter with his mechanics, play recognition and ability to handle pressure all needing improvement before he can be QB1. One thing worth noting, he received the most first-place votes (nine) in quarterback rankings and also received nine votes for highest bust potential.

Unfortunately, teams like the Carolina Panthers, Seattle Seahawks and Pittsburgh Steelers aren’t in great spots. All three organizations lack a starting quarterback who they can count on in 2022 and there are no long-term plans after this season.

“I’d hate to actually be depending on picking your quarterback,

There isn’t a Trevor Lawrence or even a prospect of the Mac Jones or Justin Fields caliber this year. In the eyes of most in the industry who scouted the 2022 quarterback class, the best passers this year would all have been second-round picks a year ago.

Desperation makes teams reach for a quarterback. Detroit is considering taking a passer No. 2 overall and there is a league-wide expectation that Carolina drafts a signal-caller with the 6th pick. While quarterbacks might be drafted early, it doesn’t change how many feel about the likelihood of these players fulfilling the expectations for where they are drafted.

“I’ll tell you right now, I don’t like any of those quarterbacks in the first round. You can have all of them. Just backups. If any of those guys are starting for you, you’re not going to the Super Bowl.”

Ultimately, one of these young quarterbacks will likely surprise and become an above-average starter during their career. For any NFL fans expecting a star to come out of the 2022 draft class, you’ll have to look ahead to 2023.