Micah Parsons on Tom Brady: ‘We got to get him out of this league’ 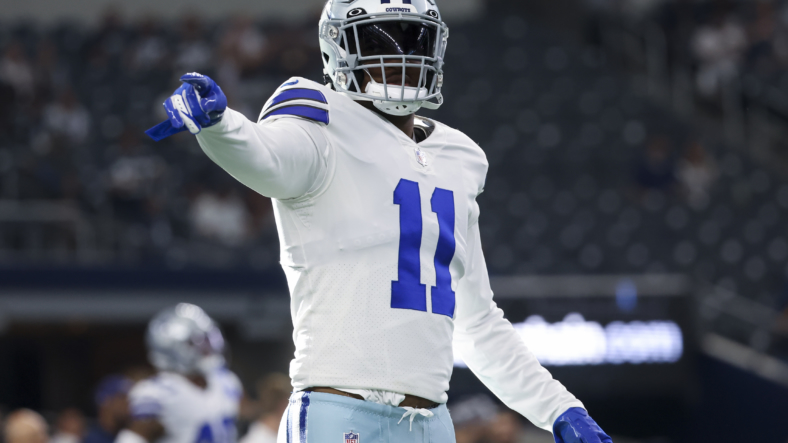 Going on 45 years old, Tom Brady is a straight-up machine. There’s never been another NFL athlete quite like the seven-time Super Bowl winner. Even though he’s just entering his second year in the NFL, Dallas Cowboys star linebacker Micah Parsons knows this all too well.

Here Brady’s entering his 23rd season in the NFL, and yet, he is showing no signs of slowing down. Not that Brady was ever quick with his feet, but when it comes to making his reads and firing a laser, he’s still got it. This was ever so evident after leading the NFL in passing yards and touchdowns in 2021.

Even after so many years in the league, modern defensive coordinators still haven’t found a way to limit or thwart Brady’s success on gameday (aside from maybe the New Orleans Saints as of late).

Many of the game’s youngest players who have made it to the pros in recent years have a unique perspective, as they grew up watching TB12 add trophy after trophy to his impressive showcase. In fact, for those like the 23-year-old Parsons, Brady has been playing the game of football, masterfully, since before the talented linebacker was even alive.

So how does Parsons feel about Brady and his basically iron man streak in the NFL? The Athletic’s Jon Machota recently had a chance to interview Parsons, and the menacing pass-rusher was quick to joke about the QB’s incredible longevity.

It should be noted that Parsons was joking when he made these comments. But his larger point stands. To many, Brady’s simply “been dominating this league too long.”

There was a time when we were all sick of Brady and his excellence when he was with the New England Patriots, but eventually, you just give in and appreciate the greatness. Football is hard, and we’ve seen time and time again that even a four-time MVP like Aaron Rodgers hasn’t been able to add that ever-so-elusive second ring on his finger just yet.

Related: Top 2022-23 NFL Rookie of the Year candidates: Aidan Hutchinson and Garrett Wilson are in good spots before Week 1

In Week 1 of the 2021 season, one that ended with Parsons winning the Offensive Rookie of the Year award, he had a chance to face off with Brady’s Buccaneers. How did Parsons do? He racked up seven tackles, a pass deflection, and even got one QB hit in on ol’ Tom Brady. Yet, despite tallying 13 sacks in his inaugural year, Parsons didn’t get a sack.

Of course Parsons wants to rectify this in 2022 as he enters his second NFL season. The good news for Parsons is that he’ll get a chance once again right away, with the Cowboys set to face the Bucs in Week 1 on September 11 in an epic Sunday Night Football matchup.