A win against Tampa Bay Buccaneers would be huge for Matt LaFleur, Green Bay Packers 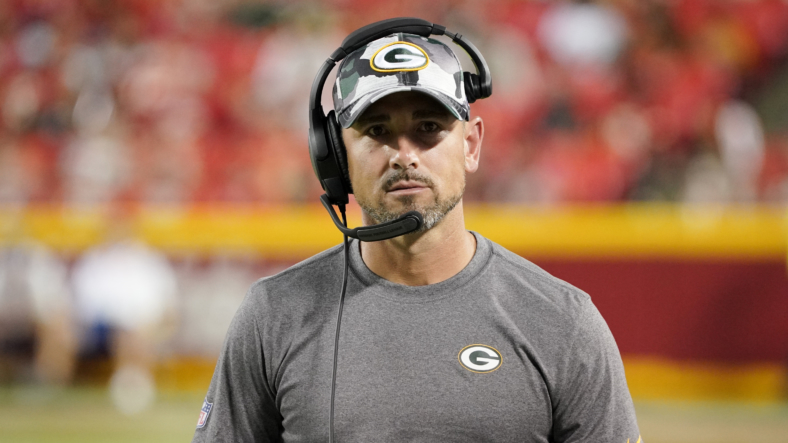 The Green Bay Packers have a great opportunity this Sunday when they go face another NFC power in the Tampa Bay Buccaneers. Tampa is dealing with suspensions and injuries on the offensive side with Mike Evans and Chris Godwin. Regardless of Tampa Bay being shorthanded or not, this is a key game for Packers head coach Matt LaFleur.

Yes, Green Bay has won 13 games in each of his first three seasons at the helm. Yes, they have made two NFC Championship Game appearances in those three seasons too. However, the Packers have struggled against physical teams like the Buccaneers and the San Francisco 49ers. Both of those teams have eliminated Green Bay from the postseason in the last three postseasons.

The Tampa Bay Buccaneers and San Francisco 49ers share very similar characteristics. They are physical defensively and in the run game. They also both have excellent game managers at quarterback in Tom Brady and Jimmy Garoppolo, who just need to do the job and let the defense do the rest.

Looking more closely at the defense, both teams have great edge-rushers in Nick Bosa and Shaq Barrett. They have All-Pro middle linebackers in Fred Warner and Devin White. Both secondaries are also tough to throw on. Currently, the Bucs and 49ers sit in the 10 in total defense, takeaways, and points allowed.

Offensively, Brady and Jimmy G don’t need to play the Aaron Rodgers or Patrick Mahomes role of being the hero every game. They just need to make the necessary throws and decisions in order to fulfill their responsibilities. Both have to be steady, and for the most part, they have been just that for their teams.

Part of their job responsibilities includes handing the ball off to an elite backfield. Leonard Fournette is the workhorse running back in Tampa and San Francisco predominantly uses a committee on the ground. The Packers remember former 49ers running back Raheem Mostert running all over them in the 2019 NFC Championship Game. Both teams run the ball well, especially against Green Bay.

Last season, the Packers were able to win on the road in San Francisco in Week 3, after coincidentally getting rocked in Week 1 against the Saints and getting back on track at home in Week 2 against the Lions. Sidenote, don’t give Aaron Rodgers 37 seconds left with the game on the line.

That win was able to propel Green Bay to another 13-win season, and it gave them the confidence that they could be a Super Bowl contender. It is amazing how similar the start of this season is to that of last season. Get rocked on the road in Week 1, come back home to get right against a division rival in Week 2, and upset an NFC power on the road in Week 3.

Tampa Bay is going to be missing the likes of Evans, Godwin, possibly Julio Jones, and free agent signee Akiem Hicks on the defensive side. Their offensive line is banged up. This team has also only scored two offensive touchdowns in the two games to start the year.

If the Packers ever wanted to upset Brady and the Bucs, Sunday afternoon would be the time to do it. If they do, it will be massive for the confidence level in Green Bay. That they can hang with physical NFC powers and possibly go on a Super Bowl run.