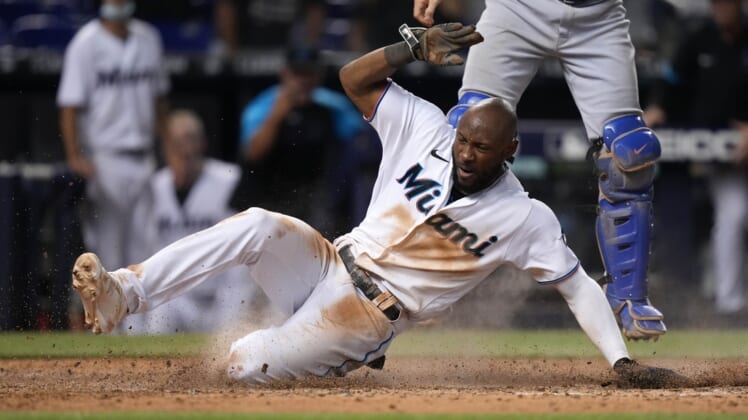 The Miami Marlins have reportedly offered outfielder Starling Marte a three-year contract extension per Jordan McPherson and Craig Mish of the Miami Herald. However, there appears to be minimal progress on the two sides reaching an agreement.

If no deal is reached, it would make sense for the Marlins, who are in last place in the NL East, to trade the 32-year-old, as he’s set to hit the open market this offseason.

Across the 48 games he has appeared in this season, Marte is hitting .291 with an .848 OPS, 18 RBIs and 16 stolen bases. The veteran has been a smooth commodity at the plate over his MLB career and is adept at playing both left and center field.

Long story short, the Marlins would have plenty of teams inquiring about a trade for the outfielder. Here are three teams that make sense for a Starling Marte trade.

It was fair to expect the Giants to miss the playoffs by a wide margin this season given the high-octane Los Angeles Dodgers and San Diego Padres residing in their division. Then something funny happened: the Giants own the best record in MLB and are legitimate contenders. Making a move for Starling Marte would enhance manager Gabe Kapler’s outfield rotation.

While Mike Yastrzemski has hit better of late, Steven Duggar is the lone everyday outfielder performing at a high level for the Giants. The team’s offensive attack has been reliant on Buster Posey and veteran infielders.

Marte could take over in left field for the struggling Alex Dickerson. The former adds a sweet-swinging hitter from the right side with the versatility to move over to center if Duggar gets a day off or the injury bug hits the team’s outfield.

The Giants should be prudent buyers. While Marte is a free agent after this season, he fits their model and would advance the offense.

All that being said, the Giants may refrain from making a move for Marte based on them believing their outfielders can right the ship at the plate, as well as LaMonte Wade Jr. finding success at numerous positions.

The Cardinals have a veteran and highly talented positional core that has been stuck in the mud for the better part of the last three seasons. Trading for Starling Marte fills a void and adds an offensive jolt.

Outside of Tyler O’Neill, manager Mike Shildt’s outfield has been all over the place. Dylan Carlson, Justin Williams, Harrison Bader and Lane Thomas have all either been on and off the big-league roster, suffered injuries or have been shaky at the plate. Marte can be the Cardinals’ new starting center fielder.

His arrival takes some pressure off the aforementioned outfielders to perform better and more importantly adds another player in his prime to a pedigree-based offense. 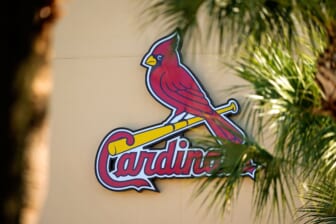 A lineup that includes Starling Marte, Nolan Arenado, Paul Goldschmidt, Yadier Molina and the 2021 version of Tyler O’Neill should be one of the best units in MLB. The Cardinals’ best bet is to keep investing in higher echelon players and hope their talent takes over. Marte would enhance the team’s outfield, no doubt.

What would stop the Cardinals from trading for him? They may have internal hope that their outfielders are better than they’ve performed in the first half of the regular season. There could also be a belief that they have to stop trading away highly regarded prospects.

Yeah, it’s becoming a deadbeat topic to say that the Yankees are in danger of missing the playoffs and that they have to make a trade. But Starling Marte would truly be a great pickup for this team.

Aaron Judge has raked this season. That’s about the only silver living for manager Aaron Boone’s outfield rotation. Third baseman-turned left fielder Miguel Andujar has been up and down. Brett Gardner and Clint Frazier have struggled mightily. Aaron Hicks’ season is over due to a wrist injury.

Marte presents a clear-cut upgrade in center field, allowing Judge to permanently return to right (he has played both center and right field this season). He has gotten on base at a high level this season by means of both line-drive contact and drawing walks. 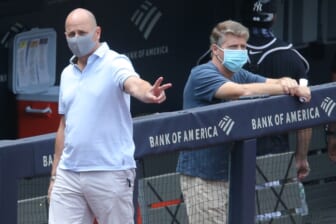 Also Read:
What the Hal? Steinbrenner ‘angry, frustrated’ by Yankees

Marte’s ability to swipe bags at a high level would add variety to the Yankees’ offense. His experience starting in left field comes in handy for the Yankees, too, given the frequency that their outfielders have been banged up over the last few years.

The Yankees are a team with a combination of veterans in their prime and youngsters fully accustomed to MLB play. Their only successful play this month is to be buyers. Starling Marte is a sensible and worthwhile transaction for their sake.