Miami Marlins get walk-off gift from Dodgers in 10th inning 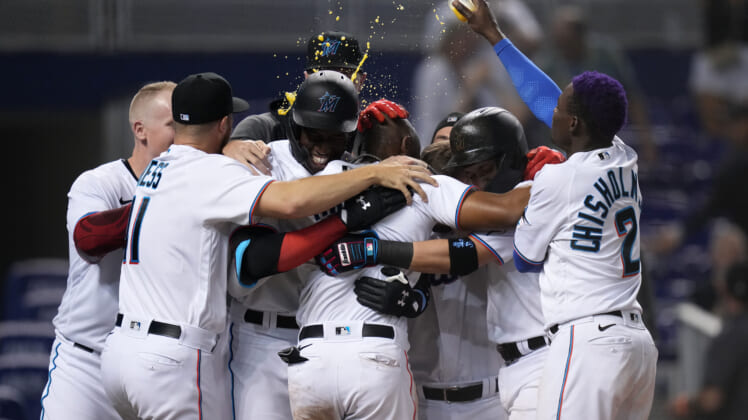 Starling Marte scored the winning run with two outs in the bottom of the 10th inning on a wild pitch/throwing error, leading the host Miami Marlins to a 2-1 victory over the Los Angeles Dodgers on Tuesday night.

The Dodgers entered this series on a nine-game win streak but have dropped the first two games against the Marlins, who are in last place in the National League East.

David Hess (2-0) earned the win with one scoreless inning of relief. He has two wins in two career appearances with the Marlins.

Marte, the placed runner in the 10th inning, advanced to third on a wild pitch from reliever Blake Treinen (2-4). Marte then scored on catcher Will Smith’s throwing error to the plate. Marte finished the game 1-for-4 with two steals and two runs scored.

Neither starter picked up a decision.

Dodgers right-hander Tony Gonsolin pitched 5 1/3 scoreless innings, his longest outing of the year. He allowed just two hits and one walk, lowering his ERA to 2.11 in six appearances, including five starts.

Miami’s Pablo Lopez, after lasting just one pitch and getting ejected in his previous start, went four innings this time, striking out eight and allowing just four hits, one walk and one run. Unfortunately for Lopez, who struck out the side in the second inning, he accumulated a high pitch count (91) and was lifted.

Lopez also went 1-for-1 as a hitter, blasting his second double of the season.

For the Dodgers the first time through their lineup, they reached on just a hit batter and an error. But in the fourth inning, Cody Bellinger’s sinking line drive got past Marlins right fielder Garrett Cooper. It was ruled a single and a two-base error, and Bellinger then scored on Smith’s RBI single.

Miami tied the score 1-1 in the sixth with an unearned run against reliever Jake Reed, who made his major-league debut. Marte singled and stole second base before scoring on Jesus Aguilar’s two-out single to left.

After a Miguel Rojas double and an intentional walk, Reed escaped a bases-loaded jam by getting Jorge Alfaro to line out to second.

The Marlins loaded the bases with one out in the ninth inning, but reliever Scott Alexander struck out Jazz Chisholm Jr. and got Marte to ground out.

Marte, though, got his revenge in the next inning.