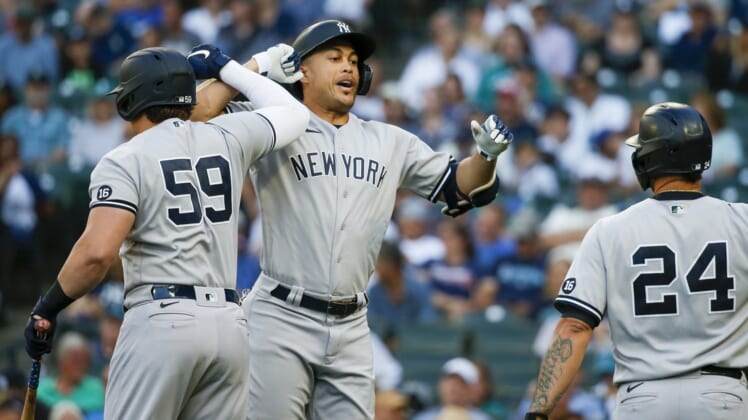 Luke Voit went 5-for-6 with a double and three RBIs, sparking the New York Yankees to a 12-1 victory over the host Seattle Mariners on Tuesday night.

Right-hander Jameson Taillon (4-4) went seven innings for the Yankees, who won for just the third time in their past 10 games. Taillon allowed one run on four hits and one walk. He struck out nine, equaling his season-best.

New York got three-run homers from Giancarlo Stanton in the first inning and Rougned Odor in the eighth. The Yankees had 18 hits, including 14 singles, with Voit’s five-hit game representing a career-high.

Mariners left-hander Justus Sheffield (5-8), who made his major league debut for the Yankees in 2018, lasted only 1 2/3 innings while losing his fourth straight decision. He allowed six runs on five hits and three walks with two strikeouts.

Stanton’s homer came after DJ LeMahieu led off with a single and Gary Sanchez drew a one-out walk. Stanton lined an 0-1 pitch over the left field wall.

The Yankees scored three times in the second. The first run came on a bases-loaded walk to Sanchez, and Voit later lined a two-run single to left.

New York made it 8-0 in the third against Mariners left-hander Hector Santiago. Odor led off with a walk, and Miguel Andujar lined a single to left. An out later, LeMahieu hit a run-scoring single and Aaron Judge followed with an RBI double, both to center.

Voit’s infield single with the bases loaded in the fifth inning increased the Yankees’ lead to 9-0.

The Mariners finally got on the board in the sixth. J.P. Crawford walked with one out, and an out later, Kyle Seager and Ty France put together back-to-back singles, with the latter bringing home Crawford.

Odor capped the victory with his homer to right field off right-hander Rafael Montero in the eighth. It came after Voit led off with a double and Gio Urshela reached on an infield single.

Struggling Yankees left-hander Aroldis Chapman pitched a scoreless ninth despite loading the bases with a single and two walks. He struck out three.