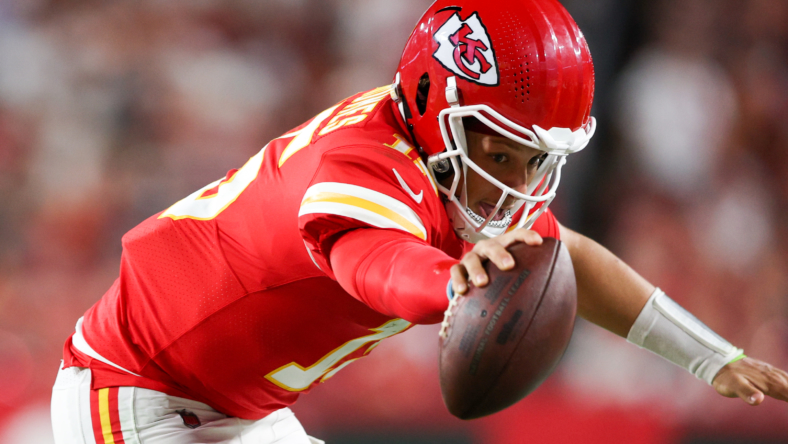 Tom Brady and the Tampa Bay Buccaneers had a tough go at it against the Kansas City Chiefs on “Sunday Night Football.” From pretty much the opening kickoff, Patrick Mahomes and Co. dominated.

Mahomes ended the evening with three touchdown passes against one interception. Meanwhile, a lack of balance impacted Brady on offense. Tampa Bay had three yards on six rush attempts while Brady was forced to pass the ball 51 times in another lackluster performance from the seven-time Super Bowl champion. Below we look at the five biggest winners and losers from Kansas City’s 41-31 victory over Tampa Bay.

Winner: Clyde Edwards-Helaire shows up for the Kansas City Chiefs

Fresh off a disastrous Week 3 performance that saw him record zero yards on seven rush attempts, this former first-round pick knew he needed to rebound. If not, there was a good chance that rookie Isiah Pacheco would take over RB1 duties in Kansas City.

The two split carries on Sunday evening with CEH tallying 92 yards on 19 attempts for an average of 4.8 yards per tote. It was, by far, the best performance of the season for the third-year running back. It also helped Kansas City create the balance that Tampa Bay missed (189 yards on 37 attempts).

Tampa Bay entered Sunday’s game with the seventh-fewest rushing yards in the NFL while averaging a mere 3.4 yards per tote. Nothing we saw from Leonard Fournette and Co. changed that against Kansas City. Fournette gained negative three yards on three rush attempts as the Buccaneers went for three yards on the ground.

The six rush attempts tied an NFL record for the fewest in a game. Meanwhile, Tampa Bay’s three rushing yards set a franchise record for futility. For his part, Fournette had been consistently good heading into this Week 4 matchup. We’re not sure what happened with the lack of touches. But Tom Brady is no longer good enough to lead an offense that has no balance.

This star tight end caught a personal-best five passes in the first quarter alone. Once Kelce tallied his sixth reception, the future Hall of Famer surpassed Rob Gronkowski for the fifth-most receiving yards from a tight end in NFL history.

Including that touchdown catch, Kelce hauled in nine receptions for 92 yards on 10 targets. Through four games, the seven-time Pro Bowler has caught 77% of the passes thrown in his direction. That seems pretty darn good.

Another future Hall of Famer, Jones was active for Sunday’s outing againt the Buccaneers after missing the past two games with a knee injury. Whether it was said injury or something completely different, Jones might as well have been inactive.

The seven-time Pro Bowler caught one of two targets for just seven yards in the loss. With Mike Evans (eight catches) and Chris Godwin (seven) doing their thing, the Buccaneers needed another wide receiver to step up. Jones was not that man Sunday night in Tampa.

Winner: Patrick Mahomes does his thing for the Kansas City Chiefs

From pretty much the get Sunday evening, it became apparent that Mahomes was ready to dominate the Tampa Bay Buccaneers’ defense. The dude led three consecutive touchdown-scoring drives to open the game. That included one of the best passes of the young season around the NFL.

Despite throwing an interception late in the game, Mahomes continued to prove his worth as an early-season NFL MVP candidate. The dude completed 23-of-37 passes for 249 yards with three touchdowns and one interception as he revenged a loss to Tampa Bay at the very same location in Super Bowl LV back in February of 2021.