Justin Fields could be Chicago Bears starting quarterback in Week 1

The Chicago Bears couldn’t pass up the opportunity to trade up and draft Justin Fields, a player who many believe has the talent to be a perennial Pro Bowl quarterback. Just as fans in Chicago were getting excited about the rookie, the buzz died down with the team still committed to Andy Dalton.

Matt Nagy and general manager Ryan Pace are working with their jobs on the line in 2021. They made an aggressive push for a Russell Wilson trade but fell short. When that didn’t work and recognizing the slim odds of a top quarterback falling to the 20th pick, the Bears signed Andy Dalton.

It didn’t take long for the organization to hype up the veteran quarterback. The team’s Twitter account posted a “QB1” graphic, receiving mockery for it, and Pace confirmed Dalton would start. but when Fields slid to the No. 11 pick and Chicago moved up to get him, many hoped it would signal a change in the team’s approach.

But Nagy said the franchise wants to take a Patrick Mahomes-like approach with the rookie quarterback. Chicago’s head coach was with the Kansas City Chiefs when they drafted Mahomes and essentially redshirted him as a rookie. With the coaching staff buzzing over Dalton, it left little doubt about the Bears’ starting quarterback plans in 2021.

Who will be the Chicago Bears quarterback in 2021?

Dalton will arrive for mandatory minicamp as the favorite to start in Week 1. While he didn’t look great as a fill-in starter with the Dallas Cowboys in 2020, his experience and steady play are valued highly by the Bears. While he will see a majority of the first-team reps, Fields will still have a shot to win the job.

NFL insider Jeremy Fowler talked on Get Up about the Bears’ quarterback battle and the long-term outlook for the No. 11 pick

“If Fields is just undeniable over the next three to four months in training camp, they’re not going to just sit him just for fun or posterity just to play the veteran. So they’re going to give him the best chance, but they’re OK sitting Fields if Dalton has a good grasp on the job and they feel like they can win with him. So, they believe they’re going to be better regardless. It just depends on whether Fields is ready Week 1.”

While Dalton might be the coaches’ preferred choice right now, that could change. Veterans like Pro Bowl receiver Allen Robinson, playing on the franchise tag, will have a chance to work with Fields and Dalton. A 33-year-old quarterback will garner some respect for his NFL resume, but talent speaks volumes.

Fields lacks experience, but his skills are superior. It’s about more than his athleticism, which would open up this offense to more RPOs and play-actions. He is also better at throwing on the run, delivers a better deep ball and has the arm talent to make every throw.

Those factors must be considered when factoring in the huge stakes in Chicago. Dalton might be able to win six games as the starting quarterback, but that is the team’s realistic ceiling. It wouldn’t be nearly enough for Nagy and Pace to retain their jobs in 2022.

If the Bears hold a legitimate quarterback competition, Justin Fields will win it. Fans will be hoping for that, because this team is capable of doing so much more in 2021 if the offense is put in the hands of its most talented player. 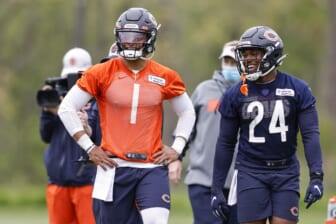