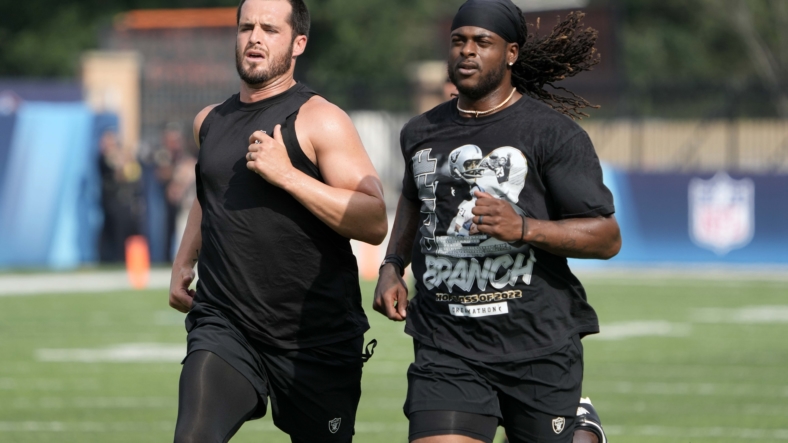 A product of Fresno State and a native of Northern California, star wide receiver Davante Adams grew up a fan of the then-Oakland Raiders. He’s a west coast guy through and through.

It’s one of the many reasons that Adams landed with the Raiders in Las Vegas via a blockbuster trade from the Green Bay Packers this past offseason. Another reason was the presence of his former college teammate with Fresno State, Derek Carr, as the Raiders’ franchise quarterback.

Adams was gleeful when he found out that he would be joining Carr in Sin City. However, it’s how he found out that’s rather interesting. Adams tells ESPN that he found out via Twitter that he had been dealt from Green Bay to Las Vegas. Specifically, Chicago Bears offensive coordinator Luke Getsy sent him a screenshot of a tweet just as Carr’s wife, Heather, texted him the same news.

“There were probably 100,000 people out there who knew I was on the Raiders before I did,” Davante Adams to ESPN.

Davante Adams now where he always wanted to be

Carr spoke up about how he would work out with Adams in Northern California after both were selected in the 2014 NFL Draft. The recently-extended quarterback noted that Adams would show up sporting a Raiders t-shirt despite being a member of the Packers. This should have been the first clue that the All-Pro wide receiver wanted to play for the team he grew up rooting for.

“Raider Nation, I’m here. It’s real. I’ve been seeing some of the reactions. I saw some live reactions from a couple people, a couple local podcasts and stuff like that, some video podcasts where people were reporting some Raiders stuff.

Me and my buddy were watching it yesterday. Seeing that, they probably think I see it and not care. But that stuff means a lot, just seeing how people react. Obviously, I’m excited. I know the team is excited, but to see the community, the rest of the world, it’s real. I’m ready to get to work.”

Davante Adams after trade to the Las Vegas Raiders

Adams, 29, comes to the Raiders after a brilliant eight-year career with the Packers. That span saw him earn five Pro Bowl appearances while being named First-Team All-Pro another two times. But it’s what he’s done over the past two seasons that has Raider Nation excited heading into Week 1 against the division-rival Los Angeles Chargers.

How widely respected is Adams around the NFL? He was ranked among the seven-best players by his peers while Minnesota Vikings star Justin Jefferson just noted that Adams, not himself, is the best receiver in the game.

Adams’ deal to the Raiders came through rather quickly this past spring when he made it clear he didn’t want to return to the Packers. It had nothing to do with money as Adams noted Green Bay offered him more than the five-year, $140 million extension Vegas signed him to. Rather, it was as much about geography as anything else.

Adams will now have an opportunity to make an immediate impact for a Raiders team that is receiving a ton of bets to win the Super Bowl. It starts Sunday afternoon in his native California against the division-rival Chargers.

Who could have drawn it up better?