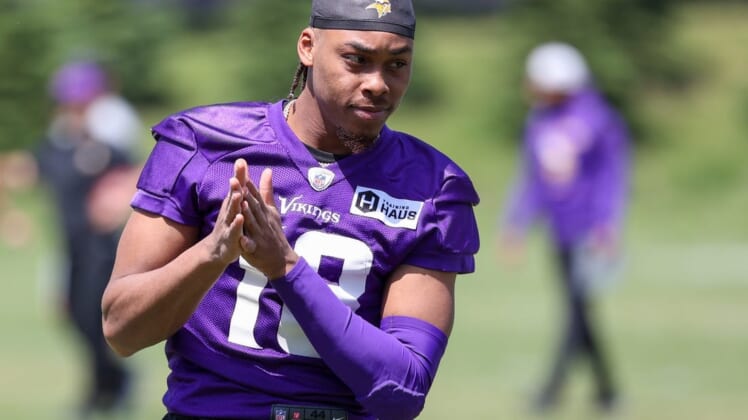 Minnesota Vikings wide receiver Justin Jefferson recognized Davante Adams as the best at his position in the NFL. Well, for the time being.

Jefferson praised the Las Vegas Raiders wideout during a recent interview with Complex.com before adding that he likely will take his place atop the league by the end of this upcoming season.

Jefferson, 23, is off to a flying start to begin his NFL career.

He posted a then-rookie-record 1,400 receiving yards in 2020 before erupting for 108 catches and 1,616 yards in 2021. His receiving yardage total last season was better than that of Adams (1,553) and trailed only Los Angeles Rams star Cooper Kupp (1,947). Kupp, who was named the NFL Offensive Player of the Year, finished 18 yards shy of breaking Hall of Fame member Calvin Johnson’s single-season receiving yards record in 2012.

“I think I have to do it three years in a row for everybody to believe so,” Jefferson said. “Some people don’t think that after two years you deserve to be at the top of the league. And then me, I feel like I’m going to surpass 1,600 yards too. So I think that I’ll become the best receiver after this year.”

Adams, 29, is a two-time All-Pro and five-time Pro Bowl selection.