The Dallas Cowboys are ramping up their efforts to recruit Odell Beckham Jr, with owner Jerry Jones now comparing the pursuit of the free agent to what happened with Deion Sanders.

After playing for the Atlanta Falcons and San Francisco 49ers, Sanders became a free agent with numerous contenders pitching him on the open market. The Hall of Fame cornerback exercised patience, later turning it into a $35 million contract with the Cowboys.

Appearing on 105.3 The Fan, Jones shed insight into the Cownoys’ pursuit of Sanders in 1995. He detailed how team leaders and offensive stars Troy Aikman, Emmitt Smith and Michael Irvin all pleaded with the Cowboys’ owner to sign Sanders.

The move worked out nicely. After losing in the NFC Conference Championship Game the previous season, Dallas won a Super Bowl in its first season with Sanders on the roster. During that same ’95 season, Sanders played in nine games and snagged two interceptions during the playoff run.

Fast forward to 2022 and history could be repeating itself. Beckham Jr. is nearing a return after suffering an ACL tear in the Super Bowl. On the brink of a comeback, he is being heavily recruited by Dak Prescott, CeeDee Lamb, Ezekiel Elliott, Micah Parsons and other Cowboys players.

“I love it, that they have that kind of perspective.”

There will be plenty of competition to sign Beckham Jr, just as there were other bidders for Sanders. The Buffalo Bills have seemingly been the favorites to land the Pro Bowl wideout for months, but the concern surrounding Josh Allen’s injury could open the door for Dallas. 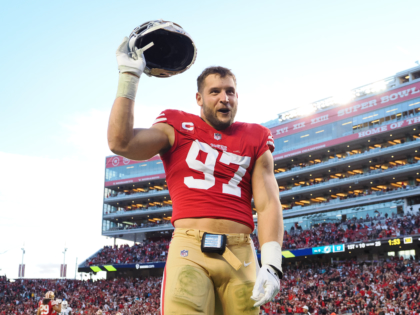 Near the top of the NFL standings, the Cowboys have an elite defense with a top-10 quarterback and one of the best rushing offenses in the NFL. However, they still want to find that No. 2 receiver who complements CeeDee Lamb and moves Michael Gallup into a role similar to the one he thrived in last season.

Considering Beckham Jr’s family is largely made up of Cowboys fans and he wants to find a landing spot that allows him to both compete and maximize his profile, Dallas could be the perfect landing spot. The only question is whether or not Jones will make the caliber of offer required for a deal to be signed.