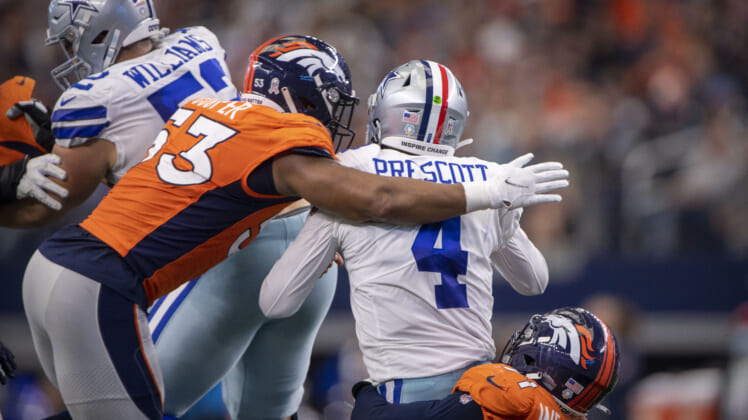 The Dallas Cowboys entered Sunday’s game against a pedestrian Denver Broncos squad at 6-1 and having won six consecutive games.

Dallas was also coming off a Week 8 win over the Minnesota Vikings that saw backup quarterback Cooper Rush lead his team to victory in Minneapolis. With Dak Prescott set to return from his one-game hiatus, most figured Dallas would come out on top in Big D. It was a double-digit favorite against a Broncos squad that just recently traded franchise stalwart Von Miller a few days earlier.

In what has to be considered the latest example that anything can happen in the NFL, these Dallas Cowboys were throttled from pretty much the opening kickoff.

Denver opened up a 16-0 halftime lead before pushing it to 30-0 late in the fourth quarter. Sure two garbage-time touchdowns and two-point conversions helped Dallas avoid its first shutout in 30 years. But the overall performance from Mike McCarthy’s squad was absolutely disastrous in a 30-16 loss.

Dallas Cowboys just didn’t get up to play

We can blame McCarthy and the veteran leaders on this team for failing to show up. We can point to Dallas simply believing that it would take out a much lesser Broncos squad at home without really doing much in the process.

That’s the most-disturbing part of Sunday’s ugly home loss to Denver. We’re talking about the NFL. Teams play for pride. Even the worst teams in the league have some of the best talent football has to offer the world over.

Apparently, this didn’t stick with Dallas leading up to Sunday’s game. It was coming off a thrilling nationally-televised win over the Vikings without Prescott in the mix. It seems that the mentality heading into this game was that Dallas could show up and win.

Teddy Bridgewater and Javonte Williams had different ideas. Subjected to trade rumors leading up to Week 9, Bridgewater completed a robust 19-of-28 passes for 249 yards. A stud rookie from North Carolina, Williams gained 111 yards on 17 touches. Meanwhile, fellow running back Melvin Gordon had 80 yards and a score on 21 carries.

What an absolutely pathetic performance from a Dallas defense against a Broncos squad that entered Week 9 averaging less than 20 points per game.

There’s a chance that Prescott is not 100% after missing last week’s game. He might have also been a tad rusty. But the quarterback’s performance left a lot to be desired. The Pro Bowler completed less than half of his passes, including just two to both Amari Cooper and CeeDee Lamb.

Even without Von Miller in the mix, Denver was able to get to the Cowboys’ signal caller for five hits and two sacks. Meanwhile, Dallas racked up all of 78 rushing yards throughout the game.

Here’s a unit that entered Sunday’s game ranked third in the NFL in scoring at 32.1 points per game. Sure Denver’s defense is robust. But what we saw from the Boys’ offense was nothing short of disastrous in Big D Sunday afternoon.

Where do the Dallas Cowboys go from here?

After a game against the Atlanta Falcons next week, things don’t get easy for Dallas. It must head to Kansas City in Week 11 to take on the two-time defending AFC champion Chiefs before taking on the first-place Las Vegas Raiders on Thanksgiving the following Thursday. Dallas must then go up against the New Orleans Saints in the Bayou Week 13 before closing out the season with four of five against bad NFC East rivals.

What does this all mean? It’s not yet panic time for Dallas. The team has a huge lead in its division. One loss doesn’t change that.

Rather, it’s all about how this team responds at home next week against Atlanta. Another clunker of a performance, and it will be panic time in Big D. That’s for sure.