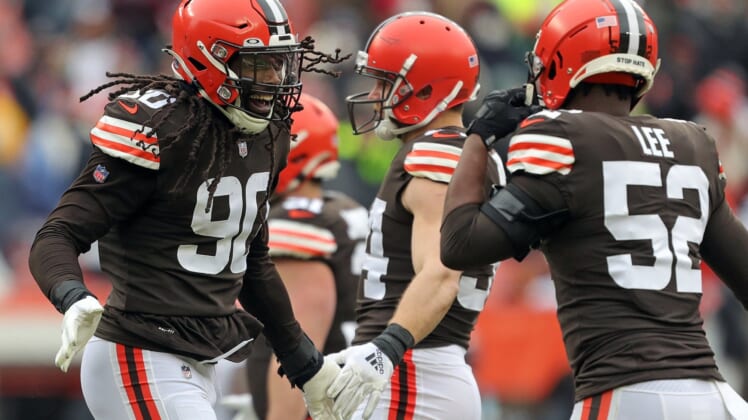 Jadeveon Clowney waited until April 15 to sign with the Cleveland Browns in 2021 and he made a huge impact on the defense. While the free-agent edge defender remains unsigned, it seems history could repeat itself in 2022.

Clowney, age 29, has a history of taking a slower approach to free agency. Recovering from an injury two years ago, he didn’t sign with the Tennessee Titans until September 2020. While he likely won’t be waiting around that long this time around, he has left many fans wondering if he would return to Cleveland.

This is a player the organization badly wants to add back to the fold. They pursued him in 2020 and finally brought him in for the 2021 season. He made exactly the impact the coaching staff hoped for, proving to be a great complement opposite of Myles Garrett.

With quarterback Deshaun Watson now on the team and potentially avoiding a suspension in 2022, Cleveland is taking an all-in approach this season that NFL insiders believe will result in a reunion with the 6-foot-5 defensive end.

ESPN’s Tony Grossi shared that he expects Clowney to re-sign with the Browns this offseason. Notably, he doesn’t believe Jarvis Landry returns to Cleveland.

The organization currently has $19 million in cap space and will have even more savings whenever a Baker Mayfield trade happens. With money not an issue, it only seems like a matter of time until Clowney is back on the roster.

Some might view Clowney as an NFL Draft bust, given the hype that surrounded the No. 1 pick in the 2014 NFL Draft. However, he played at a high level in 2021 and proved to be an essential part of Cleveland’s front seven.

Garrett is one of the best players in the NFL, capable of winning Defensive Player of the Year each season. While he’s recorded double-digit sacks in four consecutive seasons, his life is made easier with a competent edge rusher on the other side of the defensive line. Putting that in perspective, his quarterback hits in 2021 (33) nearly doubled his combined total (36) from 2019-’20.

Naturally, Clowney also benefits from playing on a team with an All-Pro talent. Among defensive ends and outside linebackers in 2021, Clowney finished with the fourth-highest ESPN pass rush win rate (24%) and ranked ahead of Nick Bosa (235%), Trey Hendrickson (23%) and Maxx Crosby (23%).

Keep in mind that he is also a very capable run defender who took just a slight step backward in that regard last season. If he returns to the level of play we’ve seen in previous seasons, Cleveland might have a top-10 run defense in 2022.

This is exactly why the Browns want him back. Clowney is the best version of himself in Cleveland and everyone around him is also better when he’s on the field.