“I think really for any player or any positional market we’re always aware of the deals that have been done over the past couple years and certainly any new deals that come up over the next couple weeks because we realize that it impacts the market to some degree…But at the same time with any player that we’re considering extending we really deal with it on a case by case and individual level and really operate within the parameters that we think make sense for our organization and our team.”

Browns fans aren’t used to having levelheaded, cool, calm and collected people in key leadership positions, but that’s what they have in Berry and reigning Coach of the Year Kevin Stefanski.

Berry is in fact the youngest GM in the NFL, yet he carries himself like a long-tenured front office executive. While he’s not the most transparent to the media, Berry draws a clear line on the topics he’s willing to discuss and what will stay in house. He commands respect his predecessors never did.

From the start of this offseason leading into the 2021 campaign, Mayfield’s extension has been a constant talking point. The Browns won a playoff game last season, and Mayfield’s improvement in his third year was a big reason why.

Many assume Mayfield will pick up where he left off and benefit from being in the same system for a second straight year for the first time in his young NFL career. However, expectations are sky-high in Cleveland, and the 26-year-old signal-caller is facing unprecedented pressure as his future hangs in the balance.

Baker Mayfield isn’t pressing for an extension, and the Browns should take advantage

It’s worth remembering that Mayfield is due for a sizable pay increase in 2022 anyway, as the Browns have already picked up the fifth-year option on his rookie contract. Mayfield also doesn’t seem to be in any hurry to get a long-term deal done.

There’s a multitude of reasons why this could be, just speculating from the outside — and all of them are positive for the Browns.

First, think about Mayfield’s backstory: He walked on at Texas Tech and won the starting job as a freshman. Then, someone named Patrick Mahomes came along, leading Mayfield to transfer to an even bigger program at Oklahoma. He walked on there, won the Heisman Trophy and was the No. 1 overall draft pick.

Everywhere Mayfield has gone, he’s earned everything he’s gotten. That’s part of what makes him tick and has allowed him to have all the success he’s enjoyed to date. While he’s obviously continued to mature into a franchise QB, Mayfield still carries that chip on his shoulder, and likely embraces the opportunity to prove his worth once again.

By all accounts, too, teammates love to play with Mayfield because of his swagger, passion and team-first mentality. Sure, he wears his heart on his sleeve on the field, but it’s never about drawing attention to himself. It’s him genuinely celebrating his teammates’ successes.

Super Bowl hopes are enough of a burden to bear. For Mayfield to throw a distracting, urgent contract demand on top of that doesn’t make a lot of sense, and would be a detriment to all parties involved.

Can Baker Mayfield guide the Browns to a Super Bowl? Click here for our NFL playoff predictions

Baker Mayfield’s stats in 2020 weren’t spectacular when you take them as a whole. He ranked 18th in passing yards, and 15th in overall passer rating. However, some of that was adjusting to a new offense on a shortened offseason, and playing a string of bad-weather games, which didn’t help his numbers.

Plus, Mayfield absolutely lit it up down the stretch last year. From Week 9 on, Mayfield had a higher Pro Football Focus grade than Mahomes. It just got lost in the shuffle a bit because of the pieces around Mayfield that played a part in his high level of play — and due to Allen making, literally, the biggest Year 3 leap for a QB in NFL history.

We must take into account the fact that Mayfield’s absolute best stretch of football was behind the best offensive line in the league, and had the top backfield tandem of Nick Chubb and Kareem Hunt to complement him.

So while pretty much everyone can agree Mayfield probably won’t play to Mahomes’ level, and doesn’t have the upside Allen does, there’s still a world where the Browns QB earns a huge payday that doesn’t crush the team’s salary cap.

One less year on the extension compared to Allen’s deal protects against the possibility that Mayfield may not ultimately reach that elite tier, but an average annual value of $40 million puts him right on par with Dallas Cowboys QB Dak Prescott right now. 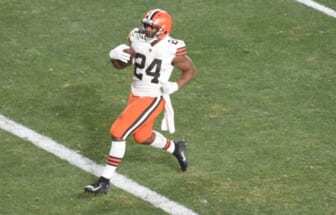 You might be thinking it’s ridiculous that Mayfield would make that much, but that’s more a reflection of the market at the position Berry alluded to. One other finer point: Allen’s guaranteed money came in at $150 million, or approximately 58% of the total deal. Mayfield’s guarantees would be at 57.5%, which is more than fair in comparison.

There’s always the potential to backload and pack Mayfield’s deal with incentives to increase its value over time. The proposed contract is quite team-friendly, but if he eventually proves to outplay his value, the embattled Browns franchise won’t hesitate to re-up with Mayfield as their long-term QB after decades of instability at the position.

The Browns should feature a much-improved defensive unit in 2021. Find out where they rate in our NFL defense rankings