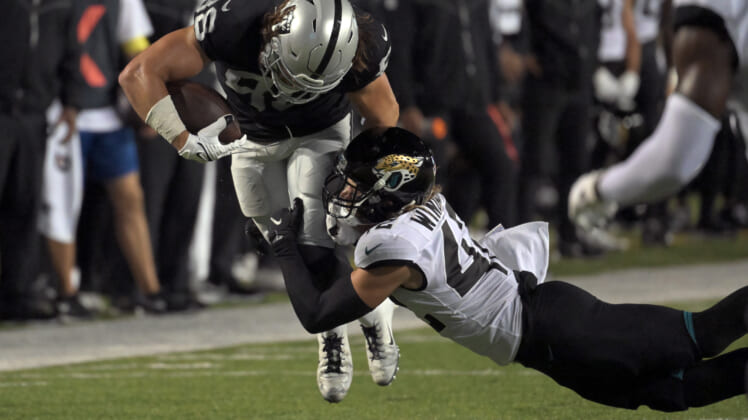 The 2022 NFL season is officially underway, and we couldn’t be more excited. While spectators didn’t get to see many stars take the field on Thursday night, we did get our first professional football matchup of the year with the NFL Hall of Fame game taking place in Canton, Ohio.

With the Jacksonville Jaguars taking on the Las Vegas Raiders at the Tom Benson Hall of Fame Stadium, the execution may not have been the sharpest compared to what we’ll see a month from now, but it’s still football.

Let’s break down the biggest winners and losers from Thursday’s Hall of Fame game.

The Raiders rested several key starters, including Derek Carr and Davante Adams, which means we still haven’t seen their Vegas debut. While fans will have to wait patiently to see their star duo take the field, their star back got plenty of work.

It didn’t take long for Josh Jacobs to let everyone know he’s ready for the year to begin. The Raiders opened up a bus-sized hole, allowing Jacobs to burst for a 12-yard rush in his fifth and final attempt in the first quarter. He averaged six yards per carry on the day, a big improvement over his 4.2 career average.

Jacobs also added a 14-yard reception on the next drive before giving way to the other backs on the roster. Rookie fourth-round pick Zamir White was the first to tote the rock in Jacobs’ absence, with longtime vet Ameer Abdullah working as a pass-catcher.

It was Abdullah who ended up scoring the game’s first touchdown, using his juice to reach the edge as he ran untouched into the endzone in the second quarter. The story from the day might be just how well the Raiders looked in the offensive trenches, constantly causing earthquakes in Jacksonville’s defense. If that theme continues in Vegas this season, the rest of the AFC West could be in trouble.

Travon Walker‘s first play drew a penalty for roughing the passer. But maybe that only ignited the young Jaguar’s motor. Walker was able to get to Raiders quarterback Jarrett Stidham on his second drive of the game, getting his first unofficial sack in the NFL. While his stats won’t count until the regular season begins, it had to be nice for Jags fans to see an early return on the first overall pick in April’s NFL Draft.

If Walker can repeat this effort, even eight times this season, he’ll be well on his way to making an impact in the NFL. For now, we’ve seen some of the athletic traits that helped him become the top pick, but he hasn’t faced the top tackles yet. We’ll see how he adjusts, but he has three more games to practice before the regular season begins. So far, so good.

Props to Ameer Abdullah for reminding fans just how fun the football season can be. Shortly after scoring a touchdown in the second quarter, Abdullah quickly got into stance and performed a swift roundhouse kick, a nice nod to NFL kicking off its season. Like everyone else, he’s pumped for football to be back.

Putting even more fun back into football, we’re likely to see several creative touchdown celebrations this season. But Abdullah’s display was pretty impressive for preseason. We’ll see who can top his effort in the next few weeks.

Loser: Jacksonville Jaguars for not playing the game

Both the Jaguars and Raiders have a new coaching staff this season. On one hand, it means they both are starting from scratch. But that’s not quite fair either.

The Raiders made the playoffs last season, and the Jags had the NFL’s worst record. Definitely opposite ends of the spectrum.

Once the game got underway, that same theme continued, with the Raiders getting out to an early 6-0 lead thanks to two Daniel Carlson kicks. Once the Raiders got out to their 13-0 lead, the game felt out of hand, with more playmakers leaving the field as the game went on.

But the Jaguars essentially threw in the towel from the start by resting most of their key contributors. They didn’t want to be embarrassed, or maybe they knew they weren’t quite ready. At this point in the season, it’s not a concern.

Escaping their extra preseason game without excessive injuries is a victory at this point in the year. We’ll see more players in action next week, and they’ll likely have a chip on their shoulder to not be embarrassed again.

Related: 5 NFL milestones that could be reached in 2022

The first night of football in 2022 started off with a bang, only not the way fans wanted.

Thanks to unexpected weather, the millions of fans waiting 172 days since the last NFL game took place on February 13, had to wait even longer. Roughly thirty minutes before the game got underway, the Ohio area got slammed with a storm, causing a 40-minute delay.

Even before the game was delayed, the Jaguars announced a list of players who wouldn’t be suiting up at all in their first matchup of the season, ruling out 21 athletes. The Raiders held out several big names as well, with Derek Carr, Josh Jacobs, Darren Waller and Hunter Renfrow out as well.

But it didn’t matter. This game is amazing. We’re all just happy that we can watch football again. Week 1 will be even better, starting Thursday, Aug. 11.