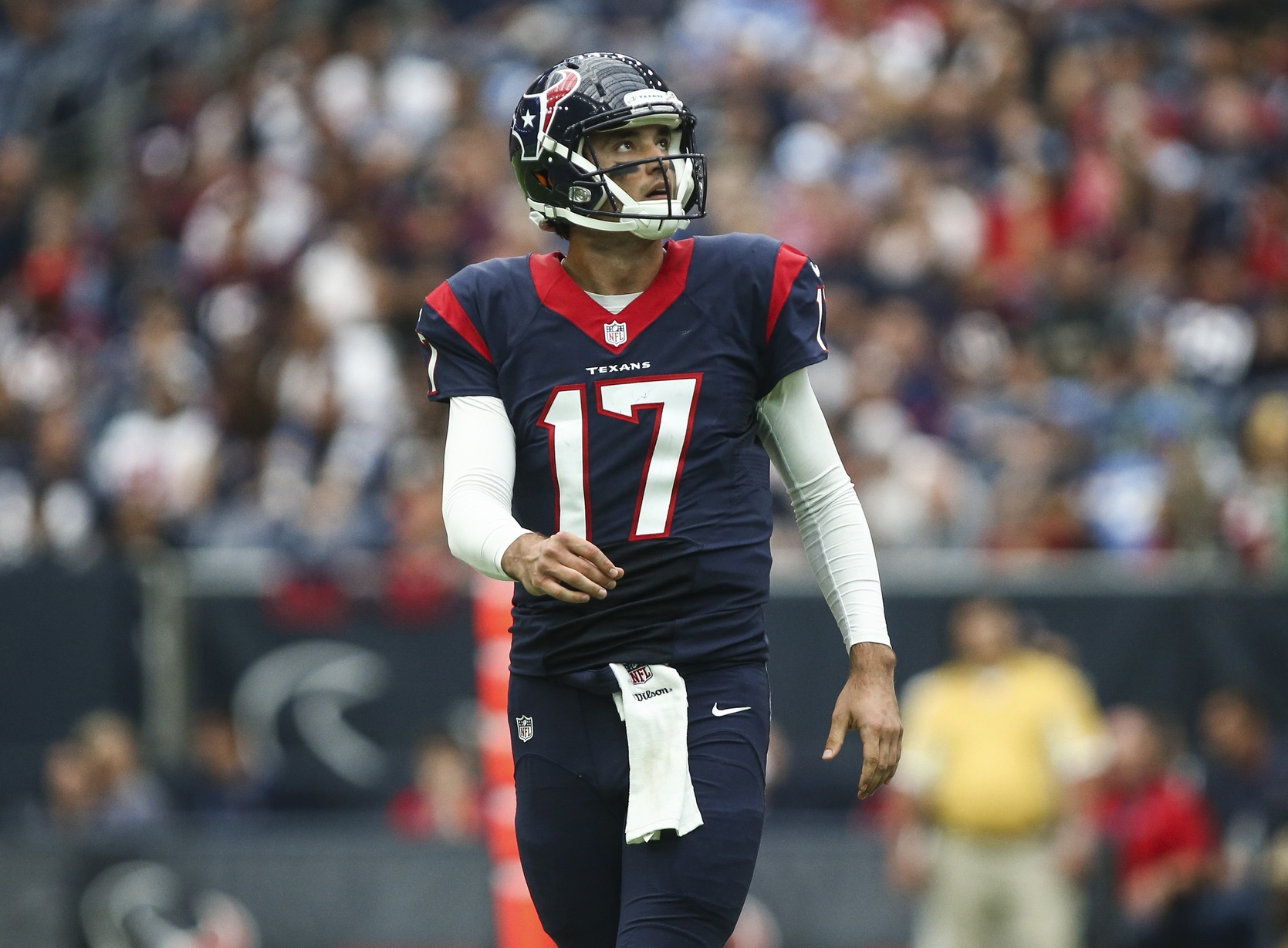 NFL free agency frenzy is in full swing, and players signed new deals left and right during the first wave. Things happened so fast, it was difficult to keep track of all of the activity.

Not surprisingly some players are signing some pretty hefty contracts. Contracts that at least a few of them won’t exactly live up to. There are bound to be free agency signings that inflict some buyer’s remorse later on throughout this season.

This leads us to reflect upon some of the biggest NFL free agent busts over the past decade. Remember any of these guys?

After being selected in the second round of the 2000 draft and spending eight seasons with the Oakland Raiders, the Jaguars took a chance with Porter in 2008. This was after Porter’s last season in Oakland when he played a full 16-game slate and recorded 705 yards and six touchdowns.

The Jaguars signed the then 30-year-old Porter to a six-year, $30.4 million deal. That was a huge commitment considering Porter’s age. Instead of landing on a gold mine, the Jaguars got a washed-up receiver who had preseason surgery on his hamstring and never bounced back. Porter’s 11 receptions for 181 yards and one lonely touchdown were the last stats recorded in his NFL career.

The Redskins are known for not exactly acing free agency. Perhaps their worst move was the signing of Haynesworth to a ridiculous $100 million contract.

During his tenure with the Redskins, he never meshed with the brass. Haynesworth even said — per The Players Tribune — “you will lose your passion for football in Washington.” Haynesworth was nowhere near the powerful defensive player he was earlier in his All-Pro years with the Tennessee Titans. Instead, he was infamous for this soft play against the Philadelphia Eagles in 2010.

In his total time in Washington, during 2009-10, Haynesworth played in only 20 games, managing just 53 combined tackles and 6.5 sacks.

Always in need of an upgrade at quarterback, the Browns took a flier on Delhomme. After all, it was only seven years earlier that Delhomme made a 2003 Super Bowl appearance with the Carolina Panthers. That, and Delhomme’s 90 starts in Carolina must have been enough for the Browns to believe Delhomme would perform miracles. He was signed to a two-year, $9 million deal.

But, just as they have in more recent years, the Browns rotated Delhomme, Colt McCoy and Seneca Wallace. The results were horrible. Even more horrible was Delhomme averaging 174.4 passing yards per contest and throwing seven interceptions compared to just two touchdowns in five games.

Needless to say, he was an expendable player allowed to test free agency the following spring.

Asomugha was signed to a five-year, $60 million deal in which he received a whopping $25 million guaranteed. This was after a successful eight-year run with the Oakland Raiders, who drafted the two-time All-Pro 31st overall in 2003.

In Philadelphia, Asomugha did not hold up his end of the bargain. With his best years behind him, Asomugha combined for 95 tackles, 16 defended passes and four interceptions between 2011-12.

After that train wreck, Asomugha retired after yet an even more disastrous stint with the San Francisco 49ers in 2013.

Drafted by the Atlanta Falcons in the third round in 2007 where he played for two seasons, followed by two years with the Rams, Robinson was a one-hit wonder. The one hit came during Robinson’s 2011 season with the Dallas Cowboys. That year he tallied a career-high 858 yards and 11 touchdowns while averaging 15.9 yards per catch.

Sounds pretty snazzy, right? So, the Jaguars swooped all over that and Robinson signed a five-year, $32.5 million deal with Jacksonville. Unfortunately, Robinson dealt with multiple concussions and wound up playing in only seven games. There he managed a mere 252 yards and zero touchdowns.

After multiple attempts to sign with other teams in 2013, Robinson never played another snap in the NFL.

One of the biggest free agency busts of all time was the 49ers putting pen to paper signing Jacobs. This was after the big-bodied running back rushed for 5,087 yards and 60 touchdowns with the New York Giants from 2005-11.

But, Jacobs never gelled well for former head coach Jim Harbaugh. He even took to social media to rip into him. Jacobs did not like his limited snap count which resulted in him playing in only two games when he rushed for seven yards on five carries. He was finally suspended the final three games in 2012 after complaining about being a benchwarmer.

Jacobs then crawled back to the Giants with his tail between his legs for one final seven-game run in 2013.

The Vikings took their chances on a then 30-year-old Jennings late in his career when they signed him to a generous five-year, $45 million deal in 2013. There, over two seasons, Jennings recorded 1,546 yards and 10 touchdowns. Not exactly posting Pro-Bowl stats, Jennings was released by the Vikings to free up a large chunk of salary cap space.

Jennings then gave it a go one more time when he signed a two-year $8 million contract with the Miami Dolphins. After just one year, he became another salary cap casualty after nabbing only 19 catches for 208 yards and one touchdown.

Jennings’ best years were spent with the Green Bay Packers from 2007-2011.

The Saints signed Byrd to a huge six-year, $54 million contract that made him the highest-paid safety in the league. This also guaranteed Byrd $26.3 million. What a huge mistake that was.

During his first year as a Saint, Byrd played in only four games before landing on IR. As such, he managed only two defended passes and 22 combined tackles. The following two seasons, Byrd missed three games while he tallied only three interceptions and six defended passes. Cutting their losses, the Saints released Byrd after the 2016 season to free up some much-needed cap space.

Byrd played last year with the Carolina Panthers where he combined for 10 tackles over 12 games. The 31-year-old safety is now a free agent.

Due a large raise after a stellar 2014 run with the Dallas Cowboys, Murray landed the big deal he was seeking with the Eagles. That came to the tune of five years for $40 million. After all, Murray recorded 2,261 scrimmage yards and 13 touchdowns in his final year with the Cowboys.

Little did the Eagles know how poor of a fit Murray would be in their offense. He was the definition of a complete bust. Used sparingly, Murray started in only eight of the 15 games he played in Philly. His yards per carry plummeted from 4.7 to 3.6 and he averaged only 46.8 rushing yards per game.

A convenient trade sent Murray to the Tennessee Titans where he rebounded in 2016. But unfortunately for Murray after 2017, he was released by the Titans after the emergence of a young Derrick Henry.

One of the most colossal busts of the past decade is Osweiler. Nobody knows what the Houston Texans were smoking when they signed the maligned signal caller to a four-year $72 million deal two seasons ago. Keep in mind, Osweiler had only seven career starts with the Denver Broncos under his belt. What could possibly go wrong here?

Well, pretty much everything.

Osweiler was horrific in Houston when he completed just 59 percent of his passes and threw for 16 interceptions compared to 15 touchdowns in 15 games. He argued with his head coach in public and was eventually benched at the very end of the season.

Interestingly enough, and in classic Browns’ style, Cleveland traded for Osweiler and his inflated salary in March of 2017. He competed in training camp and was eventually released by the Browns before the start of the 2017 season.

This eventually led to the Browns paying Osweiler nearly $900,000 to return to the Broncos, where he was again — bad to the bone. It would be utterly shocking if any team out there takes a flier on Osweiler in this year’s free agency.