Why Washington Nationals should extend Josh Bell before 2022 MLB season

Josh Bell was one of only a handful of veteran players who survived the Washington Nationals’ 2021 roster purge. Now in 2022, do they view Bell as a part of their future going forward?

Bell, 29, is a free agent after 2022 and the Nationals have a track record of trading and/or letting position players walk in free agency (Ian Desmond, Bryce Harper, Anthony Rendon and Trea Turner). That said, Washington is beginning a rebuild, and Bell could be a veteran mainstay for their vision.

Here’s why the Nationals should go against the grain and extend Josh Bell before the 2022 MLB season.

Josh Bell is a sturdy, everyday player for the Washington Nationals

Bell put forth an encouraging debut season with the Nationals. After a trudging start, he turned a corner and became an integral source of offense for manager Dave Martinez’s lineup.

Bell is a legitimate power threat from both sides of the plate. According to Statcast, Bell finished 2021 in the top four percent of MLB in maximum exit velocity (115.8 mph), top seven percent in hard-hit percentage (52.0 percent) and top eight percent in average exit velocity (92.5 mph).

Sure, Bell lacks a bit defensively. At the same time, he’s one of the better hitting first basemen in the sport and the Nationals’ best everyday player behind Juan Soto.

Now it’s a matter of what version of Bell the Nationals are going to get moving forward: the one who cranked out 37 home runs in 2019, the one who hit .226 in 2020 or the balanced player from last season? From Washington’s perspective, they can afford to run the risk of choice three being the answer.

Objectively speaking, they’re investing in a first baseman in his prime who has put together two plausible seasons over his last three and has been a reliable hitter for the bulk of his MLB career. Bell is a safe bet to repeat his 2021 performance.

Washington Nationals have a precarious infield outside of Josh Bell

Bell is the Nationals’ opening day first baseman. It’s anyone’s guess who will be throwing groundballs over to him, though; Washington has three undetermined starting infield positions.

Carter Kieboom, once the organization’s top prospect, has struggled to gain traction in the big leagues and was recently placed on the 60-day injured list with an elbow injury. Maikel Franco is coming off an underwhelming offensive season with the Baltimore Orioles. Alcides Escobar played well last season but is likely a stopgap. Cesar Hernandez figures to start, as he’s a steady, contact hitter, but he also hit .232 last season. Luis Garcia has flaunted power but is still raw.

Bell is the lone constant in the Nationals’ infield. Yes, they aren’t going to be competing for the playoffs, as they’re a rebuilding team, which adds merit to shopping Bell.

Let’s go down that path, shall we? Washington moves Bell for a desired prospect or two. Know what the result of that transaction is? Martinez not having a single shoo-in, long-term infielder. Frankly, depending on how veterans like Hernandez and Franco fare, that could be the worst infield in the sport down the stretch.

The Nationals need fixtures. Past 2022, Soto is the only given. They need another given, and Bell gives them one at a premium position.

Washington Nationals have the payroll flexibility to extend Josh Bell

Washington enters the 2022 MLB season 20th in payroll (roughly $109 million) per Spotrac. Bell being a free agent at the end of next season and Patrick Corbin hitting the open market after 2024 gives Washington plenty of flexibility to extend Bell.

The Nationals’ roster is primarily made up of players in the early stages of their MLB career (in other words, they’re under team control for the foreseeable future) and veterans on cheap contracts. Of course, the youngsters’ salaries will increase with playing time. Simultaneously, everyone isn’t going to break the bank, and it doesn’t get in the way of keeping Bell. 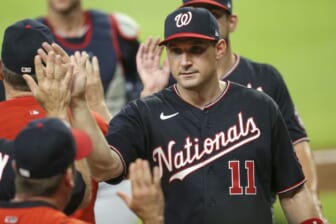 The Nationals have a lot of promising youth, but there’s also a lot of question marks, specifically in the infield. Is the clock ticking on Kieboom? Can Garcia be an everyday player? Do the Nationals feel that 2021 first-round draft pick Brady House can be their shortstop of the future?

The answers to those questions are uncertain and in some cases a negative response. Concerning Bell, the only question is whether he can be more consistent. The Nationals don’t need Bell to be a superstar or even their best player: they just need him to be a fixture.

Extending Josh Bell is the prudent play for the Nationals.