NFL front offices think Tim Tebow signing ‘is a gimmick’, doesn’t have shot at playing in 2021 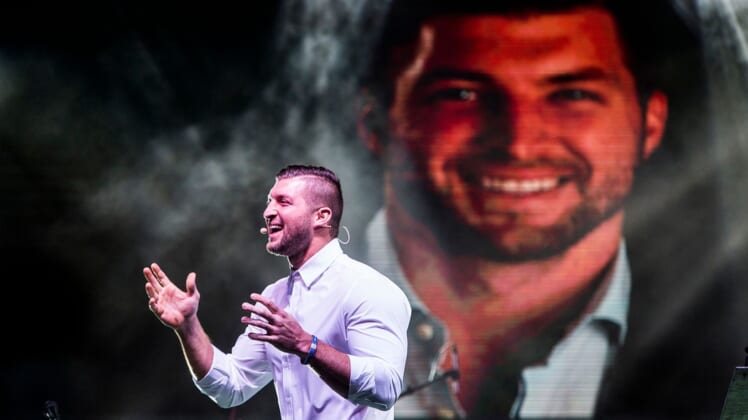 Tim Tebow is close to returning to the NFL after years away from the gridiron, but not everyone in the league believes the Jacksonville Jaguars’ big move is legitimate.

Tebow last played in the NFL during the 2015 preseason with the Philadelphia Eagles, but was quickly cut off the roster. Now, following a four-year run playing professional baseball, the 33-year-old is reuniting with close friend Urban Meyer in Florida.

Shortly before the 2021 NFL Draft, word broke that Meyer brought Tebow in for a workout at tight end. The 33-year-old seemed to make an impression, generating some buzz as a potential signing and received strong praise from the organization.

While a deal hasn’t been officially signed, Tebow is expected to be on Jacksonville’s roster when training camp opens in July. After five years away from the game, some believe he can make the transition to playing tight end and he might have a shot at making the 53-man roster. But it seems many in the league view this differently.

NFL executives told ESPN’s Dan Graziano that they believe the Tebow signing “is a gimmick” and he doesn’t really even have a shot to make the Jaguars’ roster for the 2021 season. Instead, front offices think this move was purely a relationship-driven decision and Meyer wanted to bring in someone he trusted.

Since agreeing to become Jacksonville’s head coach, Meyer’s transition to the NFL has already encountered some problems. He hired Chris Doyle, who faced numerous accusations of abuse and racism from players at Iowa, to serve as the Jaguars’ performance coach. A day after Meyer received intense scrutiny for the hire, Doyle resigned.

There’s also a belief that Meyer approached his first NFL Draft like a college coach, prioritizing former top high school football recruits over players who outperformed them at smaller programs.

The Jaguars are very thin at tight end heading into training camp. Meyer drafted Ohio State tight end Luke Farrell, who he recruited and coached, with the team’s fifth-round pick. Farrell will play significant snaps in 2021, but there is no safe bet to make the roster behind him.

Tebow will certainly help attract more fans to training camp and could lead to more people buying custom-made Tebow jerseys. But he never caught a pass in college or the NFL. On the very rare instance the New York Jets tried throwing him the football in 2012, it didn’t go well.

For now, Meyer isn’t going to receive too much criticism for bringing his former star out of retirement in an effort to revitalize his career. But if Tebow looks far past his prime in the preseason and still makes the roster, both he and Meyer might not be long for the NFL.