Tennessee Titans end freefall, pick Malik Willis at No. 86 in third round of 2022 NFL Draft 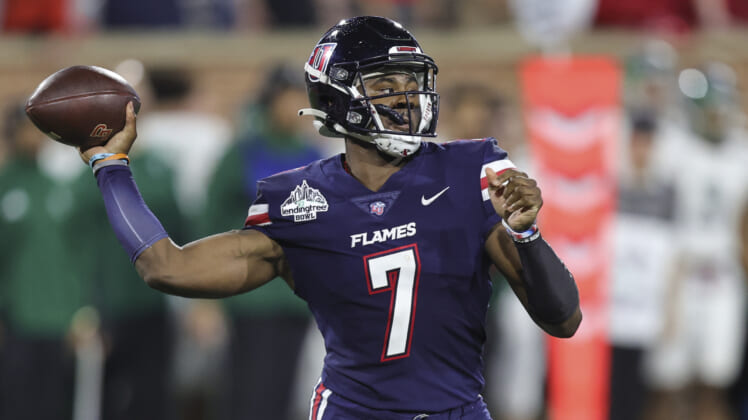 Entering the 2022 NFL Draft, there was talk that Liberty quarterback Malik Willis could go as high as No. 2 at one point. Once the first day of the player selection process came and went with only one QB taken, the wide expectation was for Willis to be one of the first five picks on Day 2. It still didn’t happen for Willis, but the Tennessee Titans were overjoyed to see him still on the board late in the third round.

It may have taken a trade up to do so, but once they saw Willis available they pulled the trigger on a trade to pick the dual-threat quarterback at pick No. 86 in the third round. In the trade, the Titans sent the 90th pick plus No. 169 to the Las Vegas Raiders, moving up four spots for Willis. 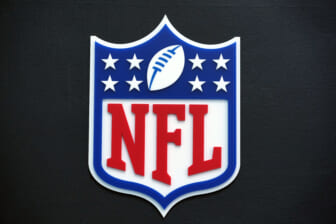 This pick is all about value late in the third round for general manager Jon Robinson. During the pre-draft process, there was some belief Willis would be the top quarterback in the entire draft class. Getting him in the third round at pick No. 86, even after having to trade up for the athletic QB is a steal.

Ryan Tannehill is officially on the hot seat, but not immediately. Willis was never expected to be an immediate contributor after entering the NFL out of Liberty and landing in Nashville gives him even more time to develop.

For Willis, it’s all about diving into the playbook and learning the offense. No matter what, Derrick Henry is still the engine behind this scoring attack, but maybe in time Willis and the Pro Bowl running back can form a devastating duo.

A former 247 Sports three-star recruit, quarterback Malik Willis spent two seasons with the Auburn Tigers before transferring to the Liberty Flames in 2019. After sitting out one year, he emerges as the Flames starting quarterback in 2022 and dominated a majority of the competition faced.

In his first season with the Flames, Willis led the team to a 9-1 record with 2,250 passing yards, 944 rushing yards and 34 total touchdowns. Viewed as a fringe first-round talent, Willis returned to Liberty for the 2021 season.

He played at a high level once again, setting career-highs in passing yards (2,857), passing touchdowns (27) and tacked on 878 yards and 13 scores on the ground. However, the Flames went 8-5. In losses against Ole Miss (3 interceptions) and Louisiana-Monroe (3 interceptions), Willis struggled.

“Upside quarterback with special parts of his game, but with no guarantee they will be assembled properly into a finished product. Willis uses his rare combination of elite rushing talent and a rocket-launching right arm to unlock explosive plays in two different ways. He has the arm to beat safeties to the deepest parts of the field and makes impressive throws from inside and outside the pocket. On the flip side, Willis’ mechanical and operational inconsistencies lead to erratic timing and accuracy, and he doesn’t throw with enough touch. Protection and receiver separation were both issues, but Willis also pressed over the second half of the season and never looked comfortable in the Liberty offense.”

There’s no questioning the physical talent. Willis would enter the NFL with one of the 10 strongest arms among quarterbacks. What makes some of these throws so remarkable is his ability to throw off-platform, with his feet not set or when he’s even throwing off one leg.

Velocity is an important skill Willis brings to the table. It allows him to fire in fastballs to his receivers, getting throws past outstretched arms of defensive backs and limiting their reaction time. The speed on the ball is also important to make throws outside the hashes. He can physically make every NFL throw.

In terms of his athleticism, he’d likely rank alongside Jalen Hurts and just behind Lamar Jackson in terms of his ability to move with the football. When he tucks it and runs, Willis shows the elusiveness and breakaway speed of a running back in the open field and his vision makes him extremely dangerous. He also brings the frame (220 lbs.) to muscle through contact and he can handle NFL hits.

The physical tools made him a first-round pick. However, Willis can’t start immediately without his long-term development being negatively impacted.

He is a raw quarterback when pressured. He drops his eyes when defenders get near him, giving up on the designed play and panicking. He also struggles at times with edge pressure, not taking advantage of a clear interior pocket. Another area where his issues show up, not taking the hot read when blitzed.

Willis also didn’t operate in a pro-style offense and even when plays were open, he missed them. The inability to read the field and a lack of evidence that he can diagnose and then react to what the defense is doing, both pre and post-snap, are major concerns. 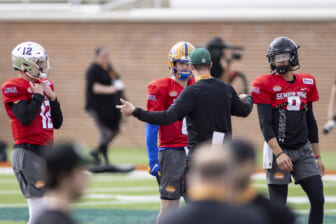 On top of all this, his accuracy is a major work in progress. He needs NFL coaching to refine his mechanics, ironing everything out and helping him stay consistent with what works. Because when things break down, most of the plays end in sacks (13.1% sack rate), off-target throws or turnovers with the rare big play mixed in.

The good news is Willis impressed teams during the pre-draft process with his leadership, maturity and self-awareness of his weaknesses. All of those personal qualities bode well for him improving, it’s just not a strong bet.

Malik Willis is the only 2022 quarterback prospect with the tools to be the face of the franchise and one of the best players at his position in the NFL. There’s just a low probability of it happening, making this selection very risky.