The Denver Broncos surprised much of the football world by naming Teddy Bridgewater their starting quarterback over Drew Lock on Wednesday.

Head coach Vic Fangio informed the Broncos this morning that Bridgewater would start over Lock, per the team’s official Twitter account:

New Broncos general manager George Paton signed on this offseason after a lengthy tenure in the Minnesota Vikings’ front office, which happens to be where Bridgewater began his NFL career.

After an underwhelming season with the Carolina Panthers in 2020, Bridgewater was on the trade block once Carolina acquired Sam Darnold in a trade. Paton pulled the trigger on a deal, bringing Bridgewater in to compete with Lock.

It was a spirited competition, filled with better play than many probably expected. Lock lit up the Vikings in Week 1 of the preseason, yet Bridgewater came in after him and held his own. Then, Bridgewater converted in clutch situations last week at Seattle, which was ultimately enough to help him win out.

Between the ties with Paton and offensive coordinator Pat Shurmur, who shared time with Bridgewater in Minnesota, Teddy B’s networking didn’t hurt his chances to become Denver’s QB1. Then again, you can’t help but feel like Lock got a bit of a raw deal here, and there’s little doubt, from a physical standpoint, he’s the more talented player. 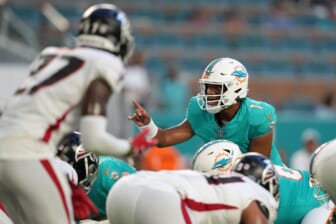 Despite the obvious strides Lock seems to have made, though, it’s evident the Broncos still view him as too inconsistent, inaccurate and not trustworthy enough as a decision-maker to steer the offense. Bridgewater may be more of a game manager, but he’s more likely to avoid big mistakes.

The Broncos have a loaded cast of skill position players on offense, and one of the NFL’s elite defenses. Bridgewater’s superior experience is an obvious factor here. Then again, his less dynamic playmaking ability compared to other AFC West QBs like Patrick Mahomes, Justin Herbert and Derek Carr puts Denver at a clear disadvantage.

Don’t be shocked if Lock requests a trade, or if another team approaches the Broncos about acquiring him as the regular season closes in.