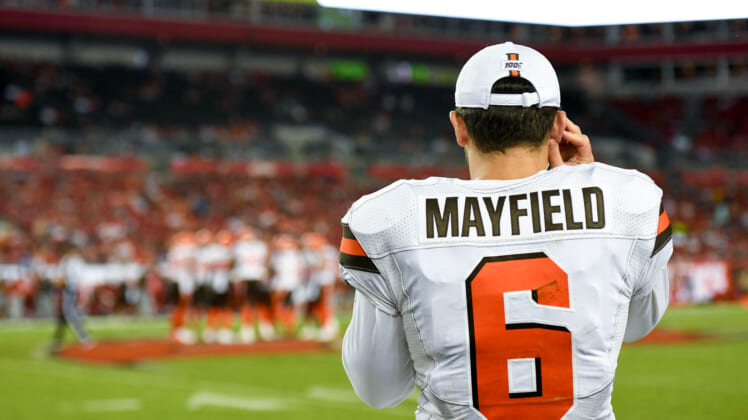 With the retirement of Tom Brady, the Tampa Bay Buccaneers will have a new starting quarterback in 2022. As of now, they have 2021 second-round pick Kyle Trask as the leading candidate to be under center when Week 1 rolls around, but for a team hoping to contend right away, he’s only penciled in for now. Instead, we could see a trade and one of the players linked to the Bucs is Cleveland Browns QB Baker Mayfield.

According to Rick Stroud of the Tampa Bay Times, the Buccaneers have looked into a potential Mayfield trade, having evaluated whether a trade makes sense from their perspective.

Yet, there’s no guarantee Mayfield is even on the table. Without Mayfield, the Browns are in a similar situation the Buccaneers currently find themselves in, without a viable starting QB. While Mayfield hasn’t exactly taken the world by storm in his recent experience, the Browns still appear ready to move forward with him in 2022.

As reported earlier, the Browns have actually done some homework of their own on another star quarterback, which could bring about a Mayfield trade. According to Mary Kay Cabot of the Cleveland Plain Dealer, the Browns have looked into trading for Deshaun Watson now that he’s been cleared of his charges.

Should they strike a deal for Watson, we could then see Mayfield dealt elsewhere, possibly to the Buccaneers. It’s yet another intriguing scenario that bears watching this offseason.

Meanwhile, Jason La Canfora has also noted that the Buccaneers could pursue Watson as well. Since Watson was just recently found not guilty, there will likely be plenty of reports linking teams to Watson over the next few weeks. The decision will ultimately be Watson’s to make, as the three-time Pro Bowl QB has a full no-trade clause.

Related: Derek Carr on the radar of the Indianapolis Colts, Cleveland Browns