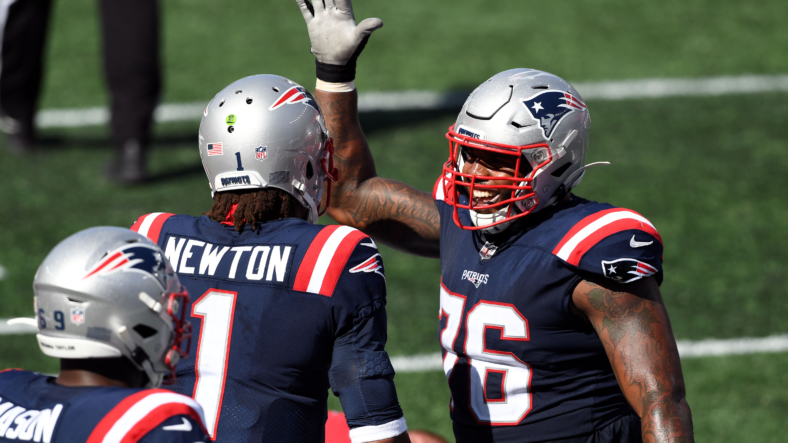 San Francisco 49ers head coach Kyle Shanahan clearly is not completely happy with his young offensive line despite a largely strong preseason from those in the trenches who will be expected to start.

Per Eric Branch of the San Francisco Chronicle, the49ers have inquired about acquiring an interior offensive lineman. That report came after San Francisco’s offensive line produced their worst performance of the exhibition season in a shutout loss to the Houston Texans in the Niners’ preseason finale.

Trey Lance never had a chance to get into a rhythm in this final tuneup ahead of his first season as the 49ers’ starting quarterback. The 2021 third overall pick under near constant pressure and consistently forced to use his mobility to bail from the pocket.

Since then, the 49ers have brought in veteran guard John Miller for a workout, according to ESPN’s Adam Schefter. Yet, the tape from the Houston defeat suggests that, if Shanahan is looking at addressing his interior line, he is misdiagnosing the problem.

While many initially pointed the finger at the new-look interior line – center Jake Brendel, second-year left guard Aaron Banks and rookie right guard Spencer Burford – the reality is that the bulk of the pressure came from the Niners’ backup tackles. That included Colton McKivitz and Jaylon Moore.

Neither Mike McGlinchey nor All-Pro left tackle Trent Williams featured against Houston, and the level of the drop-off from that pair to the reserves was brutally illustrated as McKivitz and Moore were tormented by an aggressive Houston defensive front.

Williams will slot in Week 1 against the Chicago Bears and cure the ills on the left side. However, McGlinchey has been suffering from irritation to his surgically repaired knee and there is no guarantee a player who has struggled with durability will be ready for the season opener.

The 49ers would still be favored to survive without him and prevail, but McGlinchey’s possible absence would open the door for McKivitz, who looks to be the frontrunner for the swing tackle role, to start at right tackle.

That would be a risk, and one the 49ers can avoid by taking advantage of an opportunity on the trade market.

Sports Illustrated’s Albert Breer reported on Monday that the New England Patriots have talked to teams regarding a potential trade for former first-round tackle Isaiah Wynn.

Wynn played left tackle for New England but had moved to right tackle this offseason. According to Breer, teams still view Wynn as a guard-tackle tweener.

It’s unclear whether the 49ers hold such a view of Wynn. But given their lack of depth at tackle, they should be interested in acquiring him to at least provide an insurance policy against injuries or poor play from McGlinchey.

He has substantially more starting experience than McKivitz having started 33 games in his career. While switching from the left to the right side is a significant adjustment, Wynn’s pedigree would give the 49ers much greater reason to feel confident in their protection even without McGlinchey on the field.

Additionally, the positional versatility some seem to believe he possesses could give the 49ers cover at four spots on the o-Line.

In the final year of his contract, Wynn may only be a short-term solution for San Francsico. However, McGlinchey is also in the last year of his rookie deal and having each of them on their books would allow the 49ers to evaluate both as possible long-term options ahead of 2023 free agency.

But the 49ers are poised to free up over $24 million in cap room with the likely release of quarterback Jimmy Garoppolo. Unless they can find a trade partner for Lance’s predecessor, the 49ers will be expected to release Garoppolo on Tuesday when rosters must be trimmed to 53.

That will give them the financial flexibility to potentially strike a deal with New England for a player who could be a short-term fix to their problems up front and perhaps a long-term answer across from Williams if the 49ers are not satisfied with McGlinchey.

Regardless of where the 49ers think their issues are in the trenches, Wynn is a talent who can help mitigate them. If the Patriots are making him available, San Francisco should be on the phone.