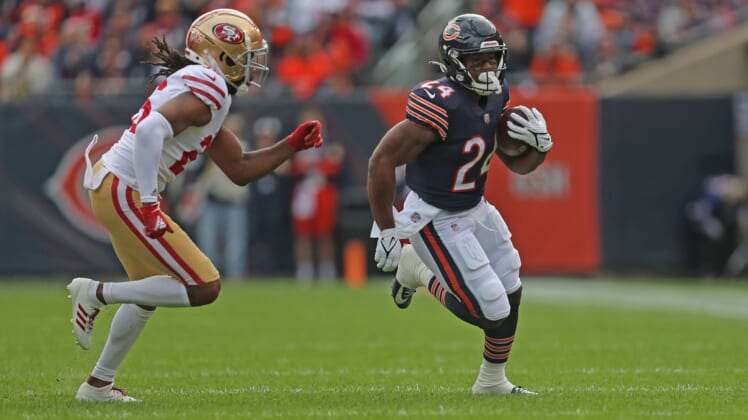 Jimmy Garoppolo passed for 322 yards and ran for two touchdowns and Elijah Mitchell rushed for a career-best 137 yards and a score to help the visiting San Francisco 49ers defeat the Chicago Bears 33-22 on Sunday to snap a four-game losing streak.

San Francisco (3-4) used an 18-point fourth quarter to surge ahead of Chicago (3-5), which has lost three straight. The 49ers scored on seven successive possessions before a series of kneel-downs to close the game.

Deebo Samuel had six receptions for 171 yards for San Francisco, including an 83-yard catch and run that set up a third-quarter touchdown.

Bears rookie quarterback Justin Fields passed for a touchdown and ran for another — a brilliant, 22-yard scamper on a fourth-quarter fourth-and-one — but defensive lapses ultimately doomed Chicago before a late Fields interception. Fields was 19-for-27 passing for 175 yards and an interception and also ran for a career-high 103 yards on 10 carries.

Chicago took a 13-9 lead into halftime. Kicker Cairo Santos bookended field goals of 39 and 40 yards around an eight-yard touchdown pass from Fields to Jesse James.

After managing just three points in 13 possessions during last week’s lopsided, 38-3 loss at Tampa Bay, the Bears scored on each of their first-half possessions for the first time since December 2013.

Santos added a 25-yard field goal on the opening drive of the second half, extending the Chicago advantage to 16-9 while stretching his franchise record to 38 consecutive field goals made.

But San Francisco responded with consecutive touchdown drives, taking a 23-16 lead with 14:11 to go on a five-yard scoring run from Mitchell and a two-point conversion pass from Garoppolo to Brandon Aiyuk.

Defensive back Eddie Jackson left the game for Chicago with a hamstring injury. San Francisco safety Jimmie Ward left with a quad injury.

Linebacker Khalil Mack (foot) was out for the Bears, while the 49ers’ inactives included defensive end Dee Ford (concussion).