The Washington Football Team just got hit with a record $10 million fine for essentially enabling a toxic workplace, but there are signs the dysfunctional franchise is turning things around in a big way.

Head coach Ron Rivera flat-out handles his business the right way, and led Washington to an NFC East title in his first year at the helm. He’s exactly the type of culture-changing leader the team needed, and Rivera’s hiring on its own is leading to gains on and off the field.

Here are three reasons why the Football Team can ascend to the top of their division once again in 2021. 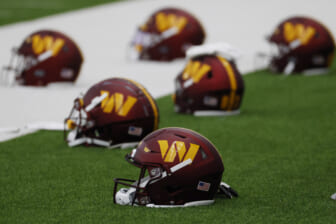 You wouldn’t find many who’d used the words “stabilizing force” to describe new Washington quarterback Ryan Fitzpatrick, but that’s precisely what he’s bringing to the nation’s capital at the most vital position on the field.

The Football Team went through a revolving door of quarterbacks in 2020, with Dwayne Haskins, Kyle Allen, Alex Smith and Taylor Heinicke all making starts. As a team, Washington combined for an 80.1 passer rating, whereas Fitzpatrick, in nine games with the Miami Dolphins, posted a 95.6 mark in that category. 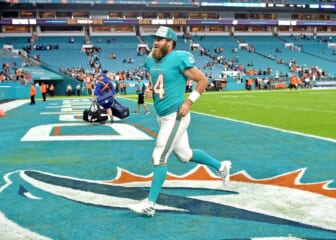 Fitzpatrick has been around the block in the NFL to say the least. Entering his age-39 season, though, he’s in the best situation he’s ever had to thrive as a starter by far.

Widely known and celebrated as “Fitzmagic”, the wily gunslinger just needs to protect the football and lean on the Football Team’s defense to guide them to a winning record. That’s an area Fitzpatrick has struggled with in the past, but again, he’s much better positioned to succeed in 2021 than at any other point in his lengthy career.

The elite Washington Football Team defense only got better this offseason

Washington ranked No. 2 in total yards allowed per game last season and fourth in scoring defense despite little help from its offense.

Chase Young more than lived up to the hype as the second overall pick in the 2020 NFL Draft, ascending to captain status as a rookie. The Ohio State product is only going to get better as a sophomore in the pros, and that on its own is exciting enough.

Beyond Young’s presumed development, though, the Football Team didn’t rest on their laurels once they lost to the eventual Super Bowl champion Tampa Bay Buccaneers in the playoffs. They built upon the strength of their roster even more.

Acquiring former Cincinnati Bengals No. 1 cornerback William Jackson II in free agency was a huge get for Washington. For good measure, the Football Team drafted Kentucky linebacker Jamin Davis to be a freelancing tackle machine with an excellent defensive front to support him.

Even during the offseason program, Davis has already been charged with tons of responsibility by Rivera and has seemed to thrive on it.

“He’s calling the huddles right now, he’s setting the front for us, he’s helping the checks,” Rivera said, per SI.com’s Bri Amaranthus. “He’s learning that part. Every practice seems to be an improvement for him as far as that part of it.

So to recap, Jackson and Kendall Fuller now form one of the better cornerback duos in the NFL, and Davis is in a defense coordinated by an expert at his position group, Jack Del Rio. Davis’ margin for error needed to be big since he’s still rather raw, and D.C. was the absolute perfect landing spot for him in the draft.

A young nucleus of excellent offensive players is ready to erupt

Terry McLaurin is one of those rare wide receivers who can produce no matter how subpar the quarterback play is. The 2019 third-round pick surprised everyone with 919 yards receiving as a rookie, but stepped up even more with 87 catches and 1,118 yards last year.

As much deserved attention as Washington’s defense gets, there are the makings of a legitimately devastating offense on this roster.

McLaurin is hardly the only threat. Tight end Logan Thomas is a former college QB who’s really coming into his own at the position, and had 72 receptions in 2020.

The Football Team drafted North Carolina wide receiver Dyami Brown in Round 3 this year. All he did was score 20 touchdowns and average north of 20 yards per catch on 106 receptions in his last two seasons with the Tar Heels. 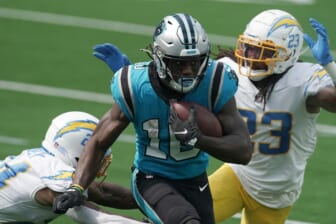 Also Read:
3 reasons why Curtis Samuel is the steal of free agency for the Washington Football Team

That’s not even to mention marquee free-agent signee Curtis Samuel. Capable of lining up in the backfield and taking the top off the defense from out wide or in the slot, Samuel is a versatile playmaker with legitimate top-end speed.

Second-year tailback Antonio Gibson is a converted receiver, so his pass-catching prowess and immense upside still to explore as a ball-carrier make him extremely dangerous. Gibson’s backup, J.D. McKissic, had a cool 80 receptions this past season, too.

Like, as long as Washington’s offensive line is competent, and Fitzpatrick doesn’t completely implode, what’s stopping this from being a top-10 offense in the NFL?

Add all that up, and you can see how the Football Team should take a significant step up from their 7-9 record of yesteryear and possibly even win a playoff game or two.