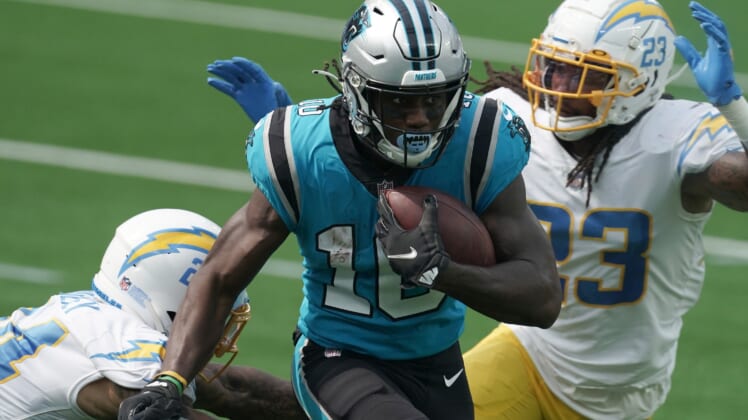 Shockingly enough, the wide receiver market has been slow to evolve in the three days since the legal tampering period opened. That’s until the Washington Football Team surprised the masses by inking Curtis Samuel to a team-friendly three-year, $34.5 million contract Wednesday evening.

What an absolute steal for the new front office combo of Martin Mayhew and Marty Hurney in the nation’s capital. A second-round pick out of Ohio State back in 2017, Samuel was a special threat for Carolina a season ago.

He caught 77 passes for 851 yards while hauling in a resounding 79.4% of his targets. The youngster added 200 yards on the ground on 41 attempts. Below, we look at why Samuel was the steal of the young NFL free agent period thus far.

Curtis Samuel is a perfect fit in Washington’s offense

Washington already has a No. 1 receiver in Samuel’s former Ohio State teammate Terry McLaurin. The 6-foot pass catcher has tallied 145 receptions for 2,037 yards and 11 touchdowns through two seasons. McLaurin is also coming off a sophomore campaign that saw him catch 87 passes for over 1,000 yards. He’s clearly on an upward trajectory.

Magnifying Samuel’s fit in D.C. is the fact that McLaurin plays primarily outside while his counterpart is solely manned the slot in recent years. It gives offensive coordinator Scott Turner two-elite level options to work with in the passing game.

Today’s NFL is also about matchups and versatility. Coming off a surprising NFC East title, Washington now has that on offense. Last season saw rookie running back Antonio Gibson transition from primarily playing wide receiver in college at Memphis. Gibson responded accordingly, racking up a whopping 1,042 yards and 11 touchdowns at a clip of 5.1 yards per touch. Meanwhile, J.D. McKissic was also dynamic in the backfield last season with Washington. He recorded a whopping 80 catches. This group will eat in 2021.

The value was there for Washington

While the overall value of $34.5 million sets the pace for wide receivers in what has been a funky market for this group, it’s still a major steal from Washington’s perspective.

We’re talking about $11.5 million annually for a 24-year-old receiver who has not yet hit his prime. Comparable contracts and the market dynamic tells us this was an absolute steal (per-year averages).

You’d be hard-pressed to find an objective football mind who would prefer any of those four options over Curtis Samuel moving forward. Add in the fit in Washington’s offense, and this is magnified further.

The major backdrop here is Washington’s decision to sign the underrated Ryan Fitzpatrick to a one-year contract earlier in the week.

The 38-year old Harvard grad is the odds-on favorite to earn their starting job during training camp. If so, his ability to make plays down the field is going to be absolutely huge for Ron Rivera and Co.

On balls that have traveled 25-plus yards down the field over the past five seasons, Fitzpatrick boasts the third-best passer rating in the NFL. That’s going to open things up on intermediate routes to Samuel, enabling his ability to make plays after the catch. Again, this is an absolutely perfect fit. It also makes Curtis Samuel the steal of NFL free agency thus far.