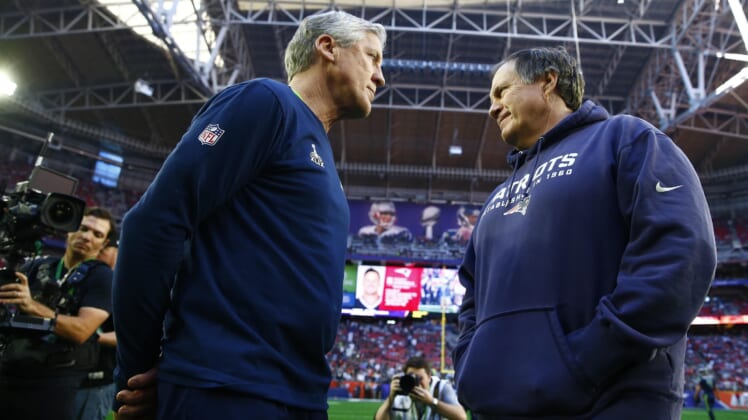 The first day of NFL free agency was something else around the league. Hundreds of millions in cold hard cash being thrown around despite the revenue downfall created by COVID-19.

Going away from their MO, the New England Patriots spent more money on Monday than during any offseason over the past decade. It’s clear Bill Belichick and Co. want to return to relevance after their first losing season since 2000.

On the other hand, it appears that the Seattle Seahawks remained largely quiet while they figure out what to do with disgruntled quarterback Russell Wilson. And while the Houston Texans made a ton of moves, none of them are likely going to change Deshaun Watson’s stance.

Below, we look at the biggest winners and losers from Day 1 of NFL free agency.

You know what they say about NFL free agency, right? Winning the March Super Bowl will not translate to actually hoisting the Lombardi when February comes around. The Patriots know this full well. They have largely avoided big-name free agents during the Bill Belichick era. That span has also included New England winning a whopping six Super Bowls.

The Pats went away from their MO in a big way on Monday, spending more money than any other team during the first day of NFL free agency. New England added three capable skill-position guys in tight end Jonnu Smith as well as wide receivers Nelson Agholor and Kendrick Bourne. This trio combined for north of 1,400 yards a season ago. At the very least, they are upgrades over what Cam Newton had at the skill positions a season ago.

Defensively, the Patriots struck gold with two-time Baltimore Ravens Pro Bowl edge rusher Matt Judon. Still only 28, he’s been downright brilliant over the past two seasons — recording a combined 54 quarterback hits and 15.5 sacks. Getting Judon for $56 million over four seasons was a coup. The same thing can be said about adding versatile defensive back Jalen Mills from the Philadelphia Eagles. He can play both corner and safety in Belichick’s complexed defense. At least for now, New England is a major winner.

We saw the NFL free agent market take off big time on Monday. Unfortunately, that did not include the wide receiver position. The biggest deal inked was the $37.5 million former Tennessee Titans top-five pick Corey Davis signed with the New York Jets (more on that below).

Sure Agholor and Bourne got their money from the Patriots. But top-end receivers hitting NFL free agency were largely left out in the cold. That included Pittsburgh Steelers star JuJu Smith-Schuster and Pro Bowler Kenny Golladay of the Detroit Lions. Meanwhile, big-name veterans in T.Y. Hilton and A.J. Green didn’t get any play. It will be interesting to see how the free-agent market plays out moving forward.

The first few hours of the NFL free agency tampering period went by without the New York Jets doing much. This came after reports suggested that the long-downtrodden organization was going to be inactive. What was the plan for general manager Joe Douglas and Co.?

Like a ninja, the Jets then swiped talented young wide receiver Corey Davis from the Tennessee Titans on a three-year, $37.5 million contract. Still only 26, the former top-five pick is coming off a 2020 season that saw him tally nearly 1,000 receiving yards with the Titans.

Then, as the day turned to evening, these Jets pulled off another coup. They added yet another big-time defender for Saleh by inking former Cincinnati Bengals star Carl Lawson. While Lawson’s sack numbers have not been great in recent years, he continues to put pressure on opposing quarterbacks. That has included 52 quarterback hits over he past two seasons. He should shine under Saleh in Jersey.

It’s important to note that new Texans general manager Nick Caserio is behind the proverbial eight-ball entering his first foray into NFL free agency. The status of Deshaun Watson remains largely up in the air after the star quarterback requested a trade earlier this offseason. Houston can’t sit idly by and figure out that situation while ignoring the market. We also know Caserio wants to put his imprint on the roster.

Even then, the large number of moves we saw from Houston on Monday does nothing to really move the needle. The team signed eight free agents. That included the likes of safety Terrence Brooks, linebacker Joe Thomas, defensive tackle Maliek Collins and wide receiver Andre Roberts. Who? Yeah, we were left wondering the same thing.

We get it. The Texans are a dumpster fire right now. They’re not going to be able to add top-end free agents. That’s fine and dandy. But not one objective person around the NFL believes these moves change anything when it comes to Deshaun Watson. They don’t.

Even before the start of NFL free agency on Monday, the defending champs had put in a ton of work to retain their core group. That included placing the franchise tag on star receiver Chris Godwin and re-signing Pro Bowl linebacker Lavonte David. These were necessary moves with Tampa Bay up against the 2021 NFL salary cap and a ton of core free agents remaining on the market.

Like clockwork, general manager Jason Licht struck big time once the tampering period started on Monday. The Buccaneers inked stud pass rusher Shaq Barrett to a four-year, $72 million deal with a mere $4.5 million cap hit for 2021. Here’s a dude who recorded 53 quarterback hits and 27.5 sacks in his first two seasons with Tampa Bay.

The Bucs then decided to run it back with tight end Rob Gronkowski on a mere one-year deal. These two moves helps this team retain a core group that surprised the masses by winning the Super Bowl just last month. All in a day’s work.

Russell Wilson is not a happy camper. The Super Bowl-winning quarterback wants better protection up front. It’s led to a reported rift between Wilson and the Seahawks’ brass, head coach Pete Carroll included. Some figured that Seattle might have wanted to appease the greatest player in franchise history by finding pass protection during Day 1 of NFL free agency.

We get it. The Seahawks are not going to change their entire philosophy to appease one man. They are also just $21.45 million under the cap. Even then, this doesn’t seem like an organization willing to work with its franchise quarterback. That could spell doom moving forward.