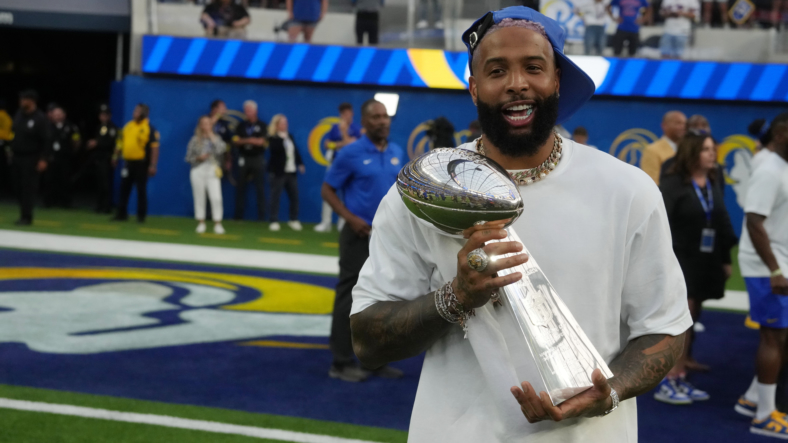 The Los Angeles Rams are confident that Odell Beckham Jr. will re-sign with the reigning Super Bowl champions. If that’s going to happen, though, the franchise must be prepared to not see the NFL star take the field for several more months.

Beckham Jr. went down with a knee injury before halftime of Super Bowl LVI, later diagnosed with a torn ACL. The surgery not only prevented him from possibly earning Super Bowl MVP, it also significantly damaged his value in NFL free agency.

Following his midseason release by the Cleveland Browns, Beckham Jr. found a home in Los Angeles. He fit into the offense perfectly, becoming a go-to target for quarterback Matthew Stafford. He looked like the best version of himself during the team’s Super Bowl run, setting the stage for a massive contract in free agency.

However, the second torn ACL of his career caused a massive setback. As he continues to rehabilitate the injury, NFL teams have stayed away as they await word that he is fully cleared to run. Similarly, Beckham Jr. isn’t negotiating with any team until the 2022 NFL season is approaching the midway point so he has a clear understanding of who are the Super Bowl contenders with a need at wide receiver.

The Rams, Buffalo Bills and Green Bay Packers have all been connected to the star wideout with a mutual interest in each franchise. But the question has remained when he would be cleared to return to the field and it appears there is now more clarity on the matter.

if Beckham Jr. won’t see the field until Thanksgiving, that would put him at a return in Week 12. By that point in the season, it would be clear which of the best teams in the NFL can offer him the best opportunity to compete for the Lombardi Trophy and post quality stats to boost his value in free agency.

The timeline could have a significant impact on which NFL team signs Beckham Jr. There are now more concerns regarding the Rams’ Super Bowl odds following the ugly loss to Buffalo in Week 1. If Los Angeles can’t turn it around, a return many around the league viewed as a virtual certainty might not come to fruition.

Fans will likely have to wait until early November before there is any sign of which team emerges as the favorite for the talented offensive weapon. Once he can play and signs with a club, it’s reasonable to expect Beckham Jr. to make a strong impact the rest of the way.