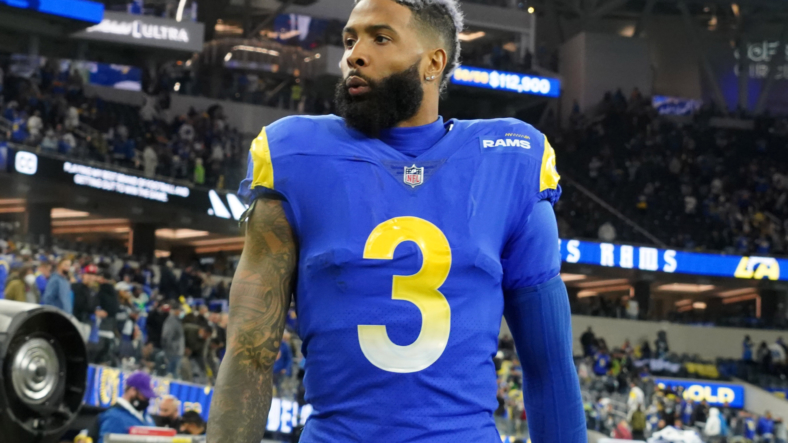 The Los Angeles Rams will kick off the 2022 NFL schedule on Thursday against the Buffalo Bills, seeking to defend a Super Bowl title that Odell Beckham Jr. played a significant part in. While the star wide receiver won’t be with the Rams, it appears the team is saving a spot for him.

Beckham Jr. went down in Super Bowl LVI with a knee injury, forced to watch from the sideline as his team celebrated its Super Bowl title. While hoisting the Lombardi Trophy helped take the sting off the injury initially, a torn ACL decimated his opportunities in free agency.

It happened at the worst possible time. The 29-year-old wideout took over in the NFL playoffs, racking up 288 receiving yards and two touchdowns in four games. Before the injury, Beckham Jr. positioned himself perfectly to cash in with a massive contract.

Instead, the veteran receiver remains a free agent as the regular season kicks off. He is still rehabilitating his knee following the second ACL surgery in his pro career and the prognosis for his return to the field is in early November.

While Beckham Jr. will generate plenty of interest from playoff contenders once he proves he is healthy, it appears the Rams are operating as if Beckham Jr’s return is almost guaranteed.

Jourdan Rodrigue of The Athletic‘ noted that the Rams’ locker room at their facility in Thousand Oaks has a designated locker with a nameplate, apparel and gear for Beckham Jr.

For now, Los Angeles will depend on All-Pro wide receiver Cooper Kupp and No. 2 wideout Allen Robinson to be the primary targets for quarterback Matthew Stafford. If everyone stays healthy and Beckham Jr returns, this will certainly be one of the best offenses in the NFL.