3 reasons to be concerned about the Los Angeles Rams, QB Matthew Stafford after disastrous Week 1 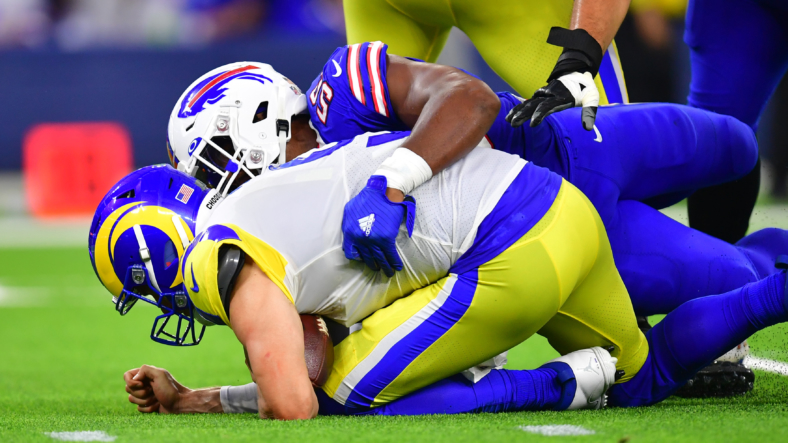 The Los Angeles Rams and quarterback Matthew Stafford took the field in Week 1 as an underdog with significant concerns about the reigning Super Bowl champions. Following a disastrous loss in the NFL Kickoff game, there are now more reasons to worry about Los Angeles in 2022.

Entering the 2022 NFL season, the defending champs have posted a 19-3 record in the opener. Not only did the Rams lose on Thursday night, but they also suffered the second-largest in a season opener by the reigning Super Bowl champions, per NFL research. The 21-point defeat at home to Buffalo likely would have been even worse if not for three early turnovers by the Bills.

It’s normal for there to be unexpected outcomes in a season opener. In Week 1 last year, the New Orleans Saints crushed the Green Bay Packers 38-3 and the Bills lost 23-16 to the Pittsburgh Steelers. A year prior, the Jacksonville Jaguars knocked off the Indianapolis Colts and then went on to lose 15 consecutive games.

However, the outcome in Los Angeles on Thursday night felt different. It emphasized the concerns many had regarding the Rams heading into the season. While there is still plenty of time for Sean McVay and Co. to address the problems, the issues could prove costly at crucial times this season.

Von Miller immediately made an impact in his first game against his former team. The future Hall of Famer was highlighted by the Sunday Night Football broadcast boost as the biggest loss the Los Angeles Rams suffered this offseason. However, the retirement of Andrew Whitworth might have been just as costly for this offense.

Miller (two sacks) made his presence felt on Thursday night, going right after left tackle Joe Noteboom. It showcased how the 27-year-old left tackle will struggle against some of the best pass rushers in the NFL. However, Noteboom is far from the only problem on the offensive line in Los Angeles.

The Bills sacked Matthew Stafford seven times in Week 1 and never blitzed on a single snap, per Next Gen Stats. It’s tied for the fourth-most sacks in a game without blitzing by a defense since 2016. Interior pressure was the most glaring issue, with defensive tackle Jordan Phillips (six pressures, 1.5 sacks) causing the most damage. Furthermore, edge rusher Greg Rousseau (one sack) and A.J. Epensa (1.5 sack) also kept the Rams’ offense out of rhythm.

Los Angeles also found little success rushing the football. Outside of an 18-yard run by Darrell Henderson, the Rams’ rushing attack averaged 2 ypr on 17 attempts. Combined with the 15 quarterback hits Stafford suffered, it was an all-around disastrous performance.

All of this is especially troubling what looms ahead for Los Angeles. The San Francisco 49ers defensive line is one of the best pass-rushing units in the NFL. The Rams also face the Tampa Bay Buccaneers (second-highest pressure rate in 2021, 28.6%), Dallas Cowboys (fourth-best pressure rate, 27.6%), Kansas City Chiefs (26.4% pressure rate, fifth in 2021), Carolina Panthers (26.1% pressure rate, 7th in 2021) along with the Los Angeles Chargers’ (Khalil Mack and Joey Bosa), New Orleans Saints (Cameron Jordan and Marcus Davenport) and Las Vegas Raiders (Maxx Crosby and Chandler Jones).

There isn’t a viable solution available in free agency and there are no quality alternatives available on the trade market. The Rams must deal with this problem with their internal options. If they fail to do so, their biggest weaknesses will be exposed by playoff-caliber teams all season.

The Matthew Stafford injury is a problem

Los Angeles attempted to downplay the questions many held regarding Stafford’s elbow injury. Adam Schefter of ESPN reported before kickoff that Stafford felt better today than he did in Week 1 last season. The Rams were confident that the elbow McVay once described as a baseball-like issue that required an offseason procedure wouldn’t cause any problems during the regular season.

The Rams depended heavily on Stafford’s arm strength last season. He led the NFL with 1,272 deep passing yards, per Pro Football Focus, posting the fourth-highest completion rate (46.3%) on throws 20-plus yards downfield. Furthermore, Los Angeles posted the third-highest aDOT (8.4) in the NFL last year. On Thursday night, Los Angeles posted a 5.8 aDOT with Stafford delivering one of his worst performances since arriving in Los Angeles.

Stafford still showed his special connection with Cooper Kupp, though, the pair struggled to connect on vertical shots. Outside of Kupp, the Rams’ quarterback practically had just as much success throwing to Bills’ defenders as his own teammates. Diminished velocity and off-target throws only amplified Stafford’s penchant for erratic play and some reckless decision-making.

Elbow injuries typically don’t get better with a quarterback asked to throw often throughout a 17-game season. Stafford attempted 41 passes in Week 1, unable to be eased into things after an inactive offseason and being sidelined in the preseason. Not only will his elbow remain a concern following Thursday’s game, but the constant duress he faced from Buffalo’s pass rush is another troubling sign for the veteran quarterback.

The Los Angeles Rams have had one of the best defenses in the NFL for several years. It played a crucial role in the franchise hoisting the Lombardi Trophy and expectations remained high in 2022 with Aaron Donald and Jalen Ramsey still on the team. However, it might be time to start lowering the standard for this unit.

All-Pro cornerback Jalen Ramsey was torched by Stefon Diggs (122 yards, 1 TD). The 53-yard touchdown was a blown coverage by Ramsey, something that might seem like a rare occurrence. However, per Next Gen Stats, it’s the fourth deep touchdown allowed by Ramsey in the last six games. The Rams don’t have much margin for error by Ramsey because of the issues around him.

Los Angeles lost boundary cornerback Darious Williams to the Jacksonville Jaguars in free agency, creating a massive hole opposite Ramsey. So, the Rams turned to David Long Jr. who struggled to contain Gabriel Davis (88 yards, one touchdown). Of course, it’s difficult for the cornerbacks to stay with these receivers when Aaron Donald accounts for the only sack and quarterback hit by a Rams’ pass rusher.

The franchise needed Leonard Floyd to take a significant step forward in 2022 after losing Miller. Instead, he made very little impact outside of a fumble recovery. Likewise, the remainder of the Rams’ defensive front outside of Donald and Greg Gaines did next to nothing.

The Rams always had a top-heavy roster that asked stars to carry the weight with depth pieces around them serving as complementary pieces. With Miller and Williams gone, this unit seems to already be taking a step back. If someone in the secondary or along the defensive line doesn’t step up, Los Angeles will have problems against top offenses.