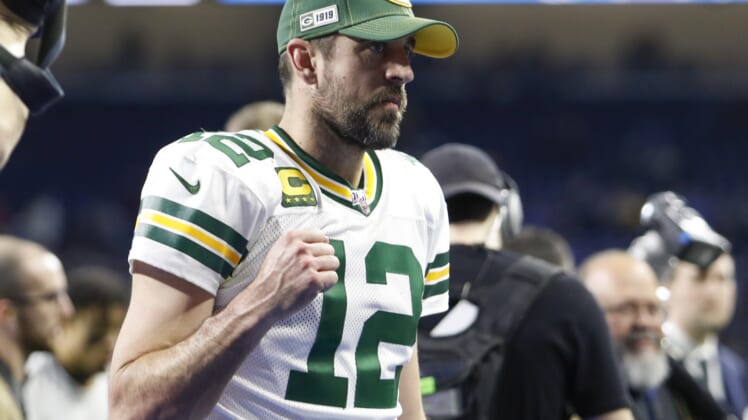 An Aaron Rodgers trade is becoming increasingly inevitable following the latest drama between the Green Bay Packers and their future Hall of Fame quarterback. While the Packers are trying to make things work, it seems many around the NFL are bracing for a blockbuster deal.

The relationship between Rodgers and the Packers took a turn in the 2020 NFL Draft. Green Bay traded up for quarterback Jordan Love in Round 1, with general manager Brian Gutekunst not informing Rodgers of the team’s plans. It sparked a distrust for Rodgers in the general manager, but was largely cast aside as he focused on proving he could still play at an elite level.

Just before winning NFL MVP for the third time in his career, Rodgers questioned his future with the organization and then cast greater doubt on it in April. The 37-year-old reportedly wanted a contract extension, a gesture that would signal a long-term commitment to him. Instead, early in the spring, Gutekunst would only commit to a restructured contract.

Hours before the 2021 NFL Draft, ESPN’s Adam Schefter reported that Rodgers wanted out of Green Bay and word quickly spread that he informed teammates he would never play for the Packers again. While both Gutekunst and CEO Mark Murphy have pushed back against trade rumors, the latest report from ESPN’s Jeremy Fowler indicates Rodgers is already thinking about playing elsewhere.

“Denver’s a team that other people around the league are watching very closely. And Paton was long in Minnesota and watched Aaron Rodgers torch them twice a year in the NFC North. So, he’ll at the very least be intrigued. And this is a team with a lot of weapons: three good receivers, running backs. Rodgers would be intrigued by them.”

The Packers are still trying to salvage the relationship. Gutekunst, Murphy and head coach Matt LaFleur all met with Rodgers individually on multiple occasions. After one of the greatest quarterbacks in NFL history informed the club he wanted out, they reportedly became willing to offer a contract extension. But based on the latest reporting, the damage might already be done.

NFL QB Rankings: Aaron Rodgers near the top amid turmoil

Will Aaron Rodgers be traded?

Rodgers and the Packers each have some leverage. If the 37-year-old is determined to never play for this team again, at least with Gutekunst at the helm, he could retire. However, that would require him paying back $24 million of his existing contract.

Rodgers does have the money to afford that, given he has earned more than $200 million during his NFL career. He could also recoup some of that money by becoming the full-time host of Jeopardy!, which he is in the running for, or he could pursue work as an NFL analyst for a major network.

Of course, the Packers don’t have to trade Rodgers. They would save cap space if he walked away from the NFL and they are reportedly refusing to move him at this point. But if this saga stretches into training camp, things get more complicated. Love offers exciting potential, but reports out of training camp made it clear he didn’t make a strong impression and he spent the entire season as the No. 3 quarterback.

If the Packers relent and start exploring trade options, there will be plenty of suitors. Because Rodgers doesn’t have a no-trade clause, he could be moved anywhere. But Green Bay would likely prefer he is moved out of the NFC, leaving the Broncos as an intriguing match.

Maybe there’s a chance the Packers can repair the relationship with Rodgers, but it might take an unprecedented move that would change the NFL forever. Since that’s unlikely to happen, the end result of this will likely be a trade or Rodgers pulling a Carson Palmer by retiring until he gets dealt.