The New York Giants traded back in the first round of the 2021 NFL Draft and selected Florida wide receiver Kadarius Toney with the 20th overall pick. As it turns out, the effort to surround third-year quarterback Daniel Jones with another weapon may have been misguided.

Toney stirred speculation when he posted on Instagram, “I don’t be mad s**t just be lame to me fr.” after the Giants’ 30-29 loss to the Washington Football Team on Thursday night, and NJ.com’s Zack Rosenblatt reported Friday that, indeed, Toney is frustrated by his lack of playing time:

Through two games, Toney has logged a mere 24 offensive snaps, per Pro Football Focus. He had two catches for -2 yards in New York’s season-opening loss to the Denver Broncos, and wasn’t targeted in Week 2.

Although Jones showed Thursday that he has many of the tools to be a franchise QB after performing so well against Washington’s highly-touted defense, it was obvious that GM Dave Gettleman has failed the signal-caller by not building him a competent offensive line.

The G-Men lost guard Nick Gates early on to a season-ending injury, which thins out an o-line that’s already weathered immense struggles. Jones is often running for his life, or using his athleticism to pick up chunk plays on the ground when the pressure closes in.

See where the Giants rate in our latest NFL power rankings

Look, the jury is still going to be out on the trade Gettleman pulled on draft day until it’s clearer whether or not Jones is the long-term answer under center. Oh, and New York has an extra first-round pick in the 2022 NFL Draft, which could be used on Jones’ replacement if the field general isn’t ultimately up to snuff.

But if Toney turns out to be an absolute bust, and can’t be the eventual No. 3 wideout over Darius Slayton, that’s going to mean he didn’t live up to his draft billing. New York had a chance to draft Justin Fields, but instead traded the rights to do so to the Chicago Bears.

We’ve seen front offices move on from QBs after even one year, as was the case when the Arizona Cardinals dumped Josh Rosen for Kyler Murray. Turned out to be a fantastic move for them. 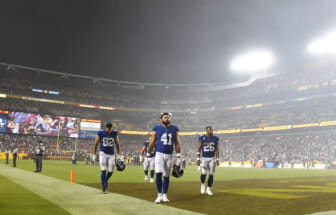 The fact that Toney was so highly drafted and can barely get on the field more often than the likes of C.J. Board is a major red flag. Toney missed much of training camp with a hamstring injury, and was in the COVID-19 health and safety protocols for a spell, too.

Despite his explosiveness, Toney is extremely raw as a route-runner and really needs to work at his craft to realize his potential.

Head coach Joe Judge is very much the no-nonsense type, which is why he’s sidelined Toney early and often in the 2021 campaign. It’s a long, 17-game season, and Toney still has time to get in Judge’s good graces.

With so much at stake this year for Big Blue, though, Toney’s early struggles are not helping the perception of the Giants amid their fifth consecutive 0-2 start.

Can the Giants recover from two opening losses to make the postseason? Read our NFL playoff predictions now