NBA trade deadline: 5 realistic trades we could see this week 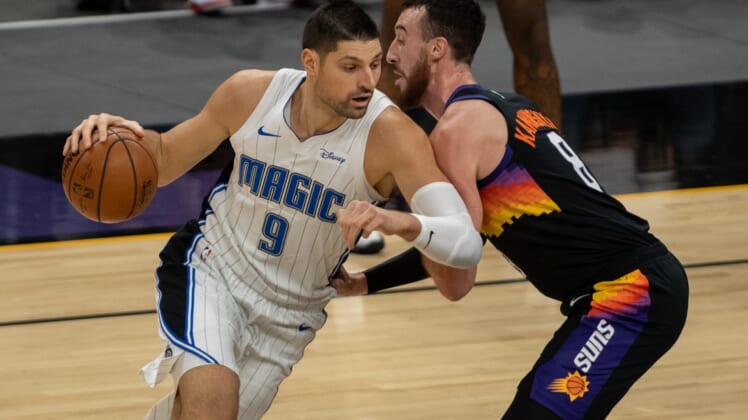 With the NBA trade deadline quickly approaching on March 25, we’re seeing rumors heat up big time. Some bottom-end teams are looking to sell off veterans in order to start anew with a rebuild. Other playoff hopefuls need a shot in the arm or two in order to be taken seriously moving forward.

From Toronto Raptors six-time All-Star guard Kyle Lowry to Victor Oladipo of the Houston Rockets, there’s been some big names bandied about ahead of Thursday’s NBA trade deadline.

With that as a backdrop, we check on five realistic deals we could see within the next few days around the Association.

We already know that there’s some major drama in California’s capital city between Bagley’s father and the Kings’ organization. At this point, it almost seems imminent that the former No. 2 overall pick will be dealt ahead of the March 25 NBA trade deadline.

If so, Charlotte seems to make a ton of sense. Terry Rozier, LaMelo Ball and Gordon Hayward have this team in playoff contention. It’s a young squad with a tremendous amount of upside. Adding the 22-year-old Bagley on the cheap would be big moving forward. Despite being sidelined to a hand injury, he could ultimately slide in at the five next to P.J. Washington. Acquiring Whiteside would be simply for a playoff push.

As for Sacramento, it is not going to get a whole heck of a lot for Bagley. Acquiring a wing in Bridges to eventually replace Harrison Barnes makes sense. The youngster would team up with the star backcourt duo of De’Aaron Fox and Tyrese Haliburton to form a solid big three. Adding a first-round pick to the mix helps, too.

Read More: Miami Heat have made a Kyle Lowry trade offer to the Toronto Raptors

NBA rumors continue to heat up as it relates to Miami’s interest in six-time All-Star Kyle Lowry. Whether the Toronto Raptors trade their longest-tenured player remains to be seen. What we do know is that Toronto entered this week’s action with a 17-24 record and having lost seven consecutive games. The team needs to make a move. If not, the possibility of losing Lowry for nothing in free agency this coming summer increases.

In this hypothetical deal, the Raptors acquire a solid starting wing in Robinson who is shooting 42% from distance in his three-year career. It’s much needed given Toronto’s struggles from the perimeter. Picking up a stopgap starting point guard in Dragic as well as two picks helps the Raptors a lot in this scenario.

As for Miami, the idea would be to team Lowry up in the backcourt with young stud Tyler Herro. The latter would move to his more natural off-ball position with Jimmy Butler doing his thing out on the wing. Realistically speaking, this group could compete with Brooklyn and Philadelphia in the Eastern Conference moving forward.

Despite boasting the worst record in the NBA, Timberwolves front office head Gersson Rosas is looking to add to their underperforming core.

That includes trade talks with Orlando surrounding the still-young 25-year-old Gordon. It makes sense from Minnesota’s perspective. Rookie No. 1 pick Anthony Edwards continues to show out after some initial struggles. Once D’Angelo Russell returns from injury, Minnesota will have a talented young backcourt. Why not then team Gordon up with Karl-Anthony Towns in the frontcourt? It almost makes too much sense.

As for Orlando, being able to add a former lottery pick in Culver would be a boon. He’d slot in with the injured Markelle Fultz and stud rookie Cole Anthony in Florida moving forward. Adding a solid young big in Naz Reid as well as a first-round pick would only be icing on the cake. In fact, Reid has more potential than Bamba — the latter of whom heads to Minneapolis in this hypothetical trade following rumors of a divorce.

Oh, so close. That’s pretty much defined the Celtics’ attempting to pull off blockbuster trades under Danny Ainge. Could this be the trade season that changes everything? Rumors out of Boston indicate that Ainge wants to be active ahead of the March 25 NBA trade deadline. It makes perfect sense with Boston entering the week under .500 and in the midst of a down season.

Ainge will not simply be looking to pull off a minor deal. Rather, adding another star with Jaylen Brown and Jayson Tatum could make sense. The 30-year-old Vucevic would be just that. He’s averaging 24.7 points, 11.8 rebounds and 3.9 assists on 48% shooting from the field this season.

Whether Orlando blows it up and moves its best player remains to be seen. But indications are that he could very well be available. If so, the team would receive a massive haul. This hypothetical includes the rebuilding Magic acquiring stud rookie first-round pick Aaron Nesmith as well as two potential young core pieces in Edwards and Williams. Add in two future unprotected first-round picks, and this could potentially get a deal done.

The Warriors are not moving either James Wiseman or their valuable future first-round pick from the Timberwolves in any trade for Oladipo. We can end those discussions right now. It’s also becoming increasingly less likely that former first-round pick Jordan Poole will be moved after a recent strong run by the shooting guard.

So, how might a rumored Victor Oladipo trade to Northern California look? It would include Houston adding a three-and-D wing in Kelly Oubre who could be part of the team’s rebuild plans should it find a way to re-sign the impending free agent. Paschall is also a nice get. The 24-year-old forward is averaging 12.3 points and 4.0 rebounds on 49% shooting during his career. He’d fit nicely with Christian Wood.

For the Warriors, this trade certainly makes a ton of sense. The hope is that Oladipo would re-sign with Golden State in free agency. He’d team up with Stephen Curry in the backcourt with Klay Thompson moving to the wing and Andrew Wiggins taking on a Sixth-Man role.