3 trades the Denver Broncos must consider to save lost season

After starting the season with a 3-0 record, the Denver Broncos have now lost four consecutive. That included an ugly 17-14 defeat at the hands of an injury-plagued Cleveland Browns squad Thursday night.

With Teddy Bridgewater under center, Denver’s offense couldn’t get anything going. The team tallied 76 total yards in the first half alone, falling down 10-0 in what seemed to be an insurmountable deficit.

This has been the primary issue for these Denver Broncos. That is to say, an inability to do anything on offense. As far as we’ve seen this season, Bridgewater is as much a part of the problem as he is the answer.

With Vic Fangio’s squad now facing the real possibility of yet another lost season, it’s important for first-year general manager George Paton to make a move or two ahead of the NFL trade deadline to jump start this team. Below, we look at three moves Denver should consider making.

With star wide receiver Jerry Jeudy (ankle) still on injured reserve, there has not been much production behind the combination of Courtland Sutton and Tim Patrick in Denver. In fact, Kendall Hinton entered Thursday’s action No. 3 among Broncos wide receivers with nine catches.

While Jeudy is set to return at some point soon, it makes perfect sense for Denver’s brass to add another quality wide receiver to the mix for whoever is going to be under center. Cooks, 28, would be just that. Even on a bad Texans squad this season, the five-time 1,000-yard receiver has hauled in 40 catches for 481 yards in six games. He could also potentially be had relatively cheap given Houston’s rebuild status.

Denver’s offensive line did a pretty solid job keeping Bridgewater upright in Thursday’s loss to the Browns. Prior to that, the Broncos’ offensive line had struggled protecting its quarterbacks (19 sacks, seventh-highest sack percentage).

More than anything, the Broncos need help along the right side where the combination of Calvin Anderson and Bobby Massie just aren’t cutting it. If Philadelphia does in fact go into full-scale rebuild mode, adding this three-time Pro Bowler to the mix would be a boon for Denver. Not only would Johnson work short-term, he’d end up being long-term fixture next to left tackle Garett Bolles. 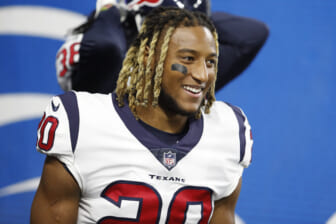 This remains the million-dollar question for Denver’s brass. In fact, that has been the case since Peyton Manning retired following the 2015 season. Enough of the stopgap starters and mediocre quarterbacks. It’s time for Denver to exhaust draft capital in finding a long-term solution.

Is Tua Tagovailoa that guy? We’re not 100% sure. What we do know is that the 23-year-old signal caller offers much more upside than either Bridgewater or Lock. He could also potentially be had should the Miami Dolphins, as expected, land Deshaun Watson in a trade with the Houston Texans.