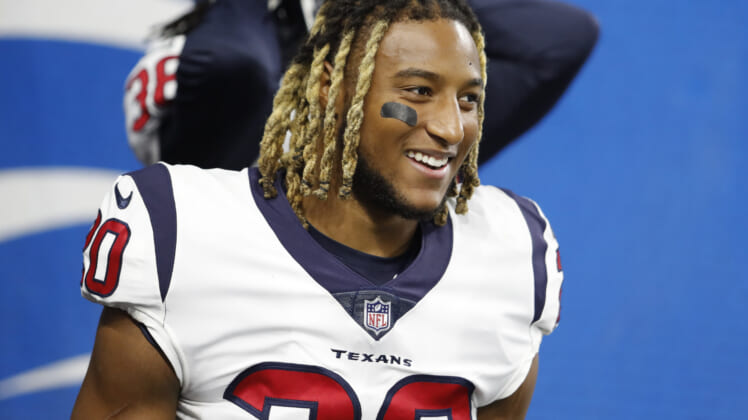 We’re more than a month into the 2021 season and the field of Super Bowl contenders is crowded with teams looking for a piece that will put them over the top. We’ve already seen a few big NFL trades this year and more are coming before November.

The Carolina Panthers have easily been the most aggressive team thus far, displaying an unusual willingness to flip future picks for potential impact talent. After seeing Carolina add cornerbacks Stephon Gilmore and C.J. Henderson, NFL contenders will likely follow suit in the weeks to come. As a result, we could see one of the most active NFL trade deadlines in a few years.

If the Kansas City Chiefs still want to compete for a Super Bowl in 2021, they can’t enter November without improving this secondary. Through five games, Kansas City’s defense is allowing the fourth-highest passer rating (109.6), the third-highest yards per attempt (9.3) and they are getting shredded deep.

Enter Houston Texans safety Justin Reid. Ordinarily, this might be a player Houston tries to retain. But this team is years away from contending and the 24-year-old safety is in a contract year. Houston could wait for him to walk in free agency, receiving a 2023 compensatory pick, or trade him now.

Reid would play deep for Kansas City and he’s a player this coaching staff could trust. Pro Football Focus credits him with just six receptions allowed and a 77.1 passer rating when targeted with a 72.8 coverage grade. Putting Reid deep and keeping Tyrann Mathieu in the box, playing a versatile role, could make a huge difference for Kansas City.

While very little is going right for the Atlanta Falcons this year, the Cordarrelle Patterson looks brilliant. Signed to a one-year, $3 million contract in April, Patterson has been one of the most impactful offensive weapons in 2021. But the Falcons aren’t winning this year and flipping the 30-year-old for a draft pick is a logical ending.

Plenty of contenders would be interested. Patterson is averaging 11.8 yards per catch and 4.2 yards per carry on the season. But he’s not just explosive running to the outside or making plays out of the backfield. This is one of the best return men in NFL history and field position matters for great teams.

Patterson would complement Derrick Henry nicely, taking on a role in passing situations and the two could even share the backfield at times. Considering the state of Tennessee’s defense, the Titans need as many playmakers as possible. A 2023 fourth-round pick for Patterson could work for both teams.

Al Woods isn’t a marquee name you’ll see mentioned for NFL trades, but he fits Los Angeles nicely. Chargers’ defensive tackles Uchenna Nwosu (35.8 PFF grade), Christian Covington (53.5) and Jerry Tillery (38.2) are two of the lowest-graded run defenders in the NFL. By comparison, Woods is the sixth-best interior linemen (80.8) at his position and he’s credited with nine run stops. A fifth-round pick for a great run stuffer is worth it for Los Angeles.

There are plenty of potential Green Bay Packers trades to consider. The Jaire Alexander injury creates a huge void at cornerback and Green Bay’s defense needs more help at linebacker. But if those areas can’t be addressed, adding a legitimate No. 2 wide receiver to pair with Davante Adams would have a huge impact on this team.

The Packers and Texans certainly have a history of making deals, agreeing to a pair of trades before the season. That familiarity would make a Brandin Cooks trade easier, especially if Houston is willing to cover some of the 28-year-old’s salary. In Green Bay, Cooks would thrive against single coverage and would beat teams deep when they shade a safety towards Adams. Aaron Rodgers will take notice and unleash plenty of bombs to a new playmaker.

While linebacker Anthony Barr is finally returning to the field, it might only be a matter of time before the Minnesota Vikings move on from him. It’s becoming increasingly clear that Minnesota isn’t a legitimate contender in the NFC North and Mike Zimmer is probably ready to move on from a linebacker who has played two games since the 2019 season ended.

It’s fair to say the Washington Football Team is desperate right now on defense. Linebacker is proving to be a particular problem. Jon Bostic is sidelined indefinitely and Barr could fill that void. Capable of dropping back in coverage and stepping in against the run, acquiring him for a pair of Day 3 picks would be a worthwhile risk for Washington. Even if it’s not Washington, Barr will be floated in plenty of NFL trades over the next three weeks.