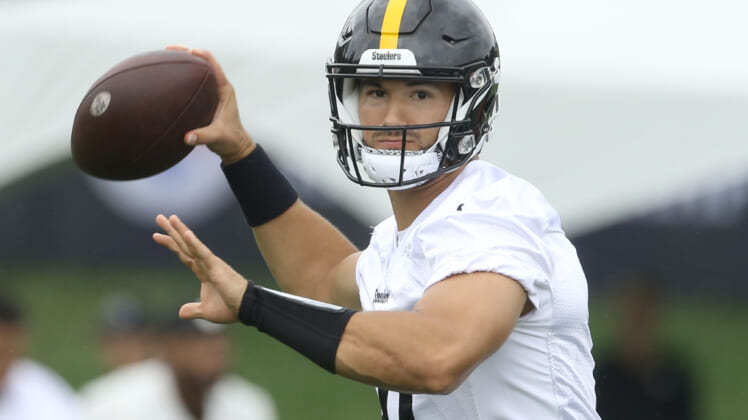 The Pittsburgh Steelers struck quickly in free agency this past offseason, signing Mitch Trubisky to be the heir apparent to Ben Roethlisberger after 18 seasons with the team. Then, in April, the Steelers made another significant addition to their quarterback depth chart by selecting Pitt QB Kenny Pickett 20th overall in the NFL Draft.

Pickett was, by many accounts, seen to be the most pro-ready quarterback in the 2022 draft class. But that doesn’t mean he’s set to start for the Steelers right away as a 24-year-old rookie.

It’s been all Trubisky instead.

The Pittsburgh Steelers started training camp on July 27, giving them an extended look at both Trubisky, Pickett, as well as their other QBs on the depth chart. This also includes longtime Steeler Mason Rudolph.

With almost a week of camp already in the books, one would think everyone has had a fair shot to prove their mettle. Only that hasn’t exactly been the story.

Instead, Trubisky has taken all the first-team reps with the starters in camp.

NBC’s Peter King had a chance to visit Latrobe for Steelers training camp, which gave him an opportunity to speak with Trubisky directly.

It’s early in camp, but it makes more sense for the veteran to be given the first opportunity to be the next Steelers starting QB. They’ve already seen Rudolph in each of the past four seasons. Why not see what they have with Trubisky first?

Having Pickett work as a backup should only keep him striving to improve each and every day until he gets noticed by the coaching staff. For now, that appears to be the plan for coach Mike Tomlin, and we shouldn’t have expected anything less.