Los Angeles Rams ‘eyed’ Jimmy Garoppolo if he became a free agent, what it means for Matt Stafford 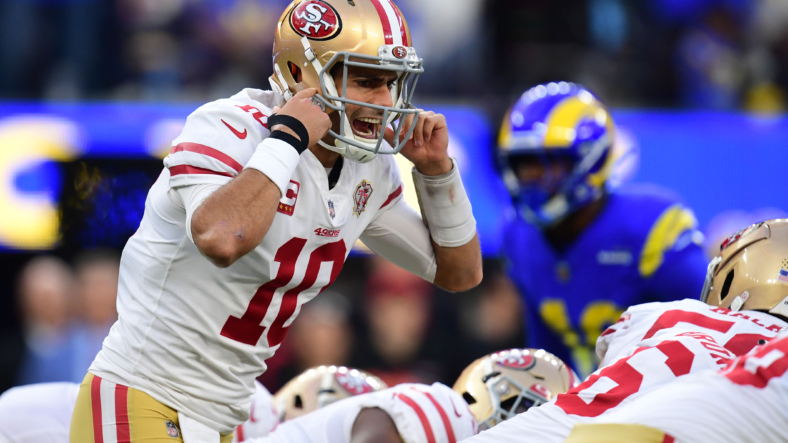 If the San Francisco 49ers released quarterback Jimmy Garoppolo before Week 1, it’s reportedly very possible that he could have joined the Los Angeles Rams for the 2022 NFL season.

The 49ers shopped Garoppolo around the league all summer, seeking to find a trade partner willing to pay for the veteran quarterback. Ultimately, a deal never materialized and San Francisco worked out a restructured contract with Garoppolo to reduce his cap hit and roster the best backup quarterback in the NFL.

It’s unclear if San Francisco ever came close to releasing Garoppolo, a move that would have saved the franchise plenty of cap space. However, it appears there would have been a strong possibility he joined the 49ers’ NFC West rival in free agency if it happened.

According to Adam Schefter of ESPN, the Rams eyed Garoppolo for weeks and many viewed them as a possible destination if he became available on the open market. Furthermore, Los Angeles and the 30-year-old quarterback reportedly “had the makings of a deal” if things didn’t work out in San Francisco.

Signing Garoppolo would have proved challenging for Los Angeles. Heading into Week 1, the franchise had just $9.14 million in cap space and it needs some of that to make additions to the roster during the season. While it would have been difficult, though, it was a situation the Rams were very interested in bringing to fruition.

Related: Trey Lance was ‘a little annoyed’ by the return of Jimmy Garoppolo

The 49ers never would have entertained trading Garoppolo to their biggest threat in the division. Additionally, per Schefter, the organization wasn’t aware that Los Angeles planned to pursue him if he was released. Ultimately, the decision to keep him could work out even better than San Francisco anticipated.

Ever since details first emerged of the elbow issue quarterback Matthew Stafford, the quarterback’s durability has been a major concern heading into the NFL season. He didn’t attempt a single throw in the preseason and the recovery from a previously undisclosed elbow procedure significantly reduced his reps at practice this summer.

In Week 1 against the best defense in the NFL, Stafford never looked right the entire game. In the moments when he wasn’t under relentless pressure from the Buffalo Bills’ pass rusher, the Rams’ quarterback missed on several throws. Just as concerning, Los Angeles lacked the explosive vertical passing attack that helped make it successful last season.

The Rams’ interest in Garoppolo suggests this elbow issue could be a long-term problem, one that forces Los Angeles to monitor how much Stafford throws in 2022. Even if he is able to start, there are already signs it is impacting his effectiveness throwing the football and that hurts the offense.

Garoppolo is now off the market and with the incentive to release him gone, San Francisco won’t trade him to the Rams. It puts Los Angeles in a situation where it desperately needs everything to go right. Otherwise, the defending Super Bowl champions could take a significant step backward in 2022.