The Las Vegas Raiders took part in the iconic Hall of Fame Game on Thursday night, delivering a 27-11 victory in the first game of the Josh McDaniels era. While there is plenty of football ahead, Las Vegas showed glimpses of what everyone wants to see in 2022.

Throughout training camp, McDaniels established a theme of accountability he wanted to carry over into games. After the first four quarters, the Raiders head coach came away relatively pleased by the effort under the circumstances.

“We’ve talked a lot about trying not to beat ourselves. The field was wet, but the ball wasn’t really that wet because it wasn’t raining by the time we started the game, but it’s been a big focus for us trying to care of the ball and trying to improve in the whole penalty situation. I thought we did decent until the fourth quarter and then we got a little sloppy. For the most part, I thought we hung in there and did the right thing.”

Las Vegas largely controlled the game throughout Thursday’s action, allowing McDaniels to get an extensive look at players through both the volume and quality of snaps. While the final score doesn’t necessarily matter, the Raiders left the field grateful to have the extra preseason game because of the benefits it offers the entire organization. 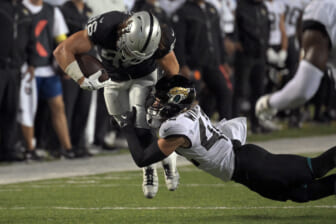 Here are five takeaways from the Raiders’ first preseason game.

Josh Jacobs and Kenyan Drake, expected to play prominent roles with the offense, each saw playing time in the first half on Thursday night.

Jacobs recorded five carries for 30 yards, tacking on two receptions for 14 receiving yards with expanded usage in the passing game. As for Drake, he totaled just nine yards on five carries.

While five running backs saw the field, rookie Zamir White delivered the best effort on the night. In his first NFL game, White racked up 75 scrimmage yards on 14 touches.

After the game, McDaniels explained why Las Vegas chose to use five of its running backs in a rotation.

“We made the decisions that we thought were the right decisions for our team, some based on depth, some based on just wanting to get guys opportunities to get in there. I always think it’s good to for backs to carry the ball during the preseason. There’s a lot of things that happen when you’re getting tackled and hit that you can’t simulate in practice. I think all our guys had the ball tonight.

In addition to Jacobs, Drake and White, veteran Ameer Abdullah also played and recorded one of the team’s three touchdowns, which were all scored on the ground.

The Raiders took advantage of a missed field goal and started the drive at midfield. Three plays after Abdullah caught a short pass and ran it for 17 yards, he caught a pitch to the right and ran it in from eight yards out to take a 13-0 lead in the second quarter.

One of the big questions coming in was the quarterback battle behind starting play caller Derek Carr, who did not play Thursday.

Stidham led a scoring drive on three of his four opportunities, even taking one in himself and earning some praise from his head coach.

“I thought he got off to a decent start. We had a couple times where we got stopped in the red zone early where those can come back to haunt you if you don’t put those in. But, I thought he made some good decisions. Threw the ball away a couple times when it wasn’t there. Escaped out of the pocket on the one touchdown run. Generally operated the offense well.”

While Stidham’s experience with the scheme provides him with an edge, the battle to be the No. 2 quarterback remains a standstill. Looking at the entire group, McDaniels firmly believes that each of the quarterbacks is starting to “grasp the whole picture” with a better understanding for decisions made by coaches.

3. Offensive line shows growth, starting point for the rest of the preseason

With all eyes on the offensive line this summer, the Raiders’ front five kept everyone’s attention in the first preseason game.

While Brandon Parker was beat several times at left tackle, it showed the depth option the team has behind Kolton Miller, who did not play. It’s important as the coaching staff seeks to gain an understanding of its depth at a position in the event of injuries.

Early on, in addition to Leatherwood, Lester Cotton Sr. was playing right guard next to the 2021 first round pick. This is good first benchmark to see where offensive line coach Carmen Bricillo and McDaniels assess this O-line heading into the first week of training camp following a game.

One thing that stood out was the protection on plays, especially on the short passes to the running backs. It allowed the running backs to not only catch the ball, but also be able to look up and see the linemen there to block and advance up the field.

If there was one thing that was great, if not perfect was the kicking from Daniel Carlson. The second team All-Pro was able to work on his kicks from both short range and long range.

Carlson successfully made all five of his opportunities with three PATs as well as field goal attempts from 32 and 55 yards out, respectively. This shows both Carlson’s confidence, but also his chemistry with AJ Cole, his holder, and long snapper Trent Sieg.

Even on his kickoffs, it seemed like there was a purpose to those as well. In four of Carlson’s six kickoffs, they landed before the end zone to give his teammates on special teams the opportunity to stop a returner.

These preseason games give players the opportunity to work on certain things and coaches to see on film how these players did on certain players in all three phases of the game.

The mentality this entire preseason has been accountability and McDaniels was hoping that would translate from the practice facility in Las Vegas to Canton, Ohio on Thursday.

This game did not need to show perfection, but it showed a lot of good stuff and mistakes that can easily be fixed through the next five weeks of training camp.

Not all good things from the Raiders were between the lines, but also the mentality from the players, whether or not they played.

“Generally, I really liked our attitude from the group. hey were into it. They gave great effort. The guys that weren’t in the game, they were paying attention on the sidelines to all the situations that were coming up.”

The Raiders return home to Las Vegas in preparation for their second preseason game on Aug. 14 against the Minnesota Vikings at Allegiant Stadium.