The Las Vegas Raiders had nearly a full house at the Intermountain Healthcare Performance Center in Henderson, Nevada. On Wednesday, veterans checked in for work and the players had their first training camp practice Thursday.

Multiple players spoke to the media, including guard John Simpson, edge-rusher Maxx Crosby, wide receiver Hunter Renfrow and inside linebacker Denzel Perryman. They all said the right things at the podium when asked about heightened expectations, contracts and a daily approach toward improvement.

The Raiders have several key positions up for grabs at training camp—most of those battles will feature three or four competitors.

Let’s review the top battles that deserve our attention and go over early projections on who wins those starting jobs. Could we see a few surprises?

The Raiders should add another competitor to this battle, and his name is Daryl Williams. If that doesn’t happen, Alex Leatherwood will likely have the first crack at the starting spot on the right side.

Though Leatherwood took a majority of his spring reps at tackle, don’t rule out a move inside as offensive linemen cross-train at different positions. Remember, head coach Josh McDaniels and offensive line coach Carmen Bricillo have one primary goal: field the best five-man unit regardless of a player’s draft status or salary.

Listed at 6’5”, 312 pounds on the Raiders’ official website, Leatherwood’s body frame doesn’t fit the mold. If he doesn’t show out at camp, the coaching staff could go with a familiar face at right tackle. Unless the front office adds another body, Eluemunor emerges as the dark-horse winner to claim the job.

If Trayvon Mullen isn’t back in action following offseason foot surgery, the defense would have two open positions on the boundary. For now, we’ll focus on the potential replacement for Casey Hayward, who signed with the Atlanta Falcons in free agency.

Vegas acquired Rock Ya-Sin from the Indianapolis Colts in exchange for edge-rusher Yannick Ngakoue and signed Anthony Averett on the same day. They’ll likely battle through the preseason for the No. 2 cornerback spot. Amik Robertson has an outside shot. He took a “significant number of reps” during spring practices, per The Athletic’s Tashan Reed.

In 2021, Averett played well in his first full year as a starter for the Baltimore Ravens, recording three interceptions and 11 pass breakups while allowing a 55.4 percent completion rate in coverage. Meanwhile, Ya-Sin started in eight out of 13 outings in the previous campaign.

Ya-Sin has the second-round pedigree that makes him an intriguing option, but if Averett continues to track the ball well at camp, defensive coordinator Patrick Graham won’t be able to keep him off the field.

Ya-Sin and Averett may both play a decent number of snaps in the upcoming campaign, but the latter has a prime opportunity to build on his best season as a pro.

The Athletic’s Vic Tafur believes Denzelle Good is a “sure bet” to start at right guard if he fully recovers from a torn ACL. While that’s a reasonable take, we shouldn’t assume that a 31-year-old 340-pound guard regains his starting role after he went down with a significant knee injury.

Good will have to show he’s back to pre-injury form on the field. On a positive note, he avoided the initial physical unable to perform (PUP) list, which is a good sign for him.

Nonetheless, how will Good look against the competition? He could face viable challengers for the starting job.

Dylan Parham likely has a future as a starter at guard or center, but he may need a season to catch up to speed on the pro level. This offseason, the coaching staff will likely focus on what’s the best position for him between the two interior spots.

If Leatherwood doesn’t win the battle at right tackle, he would probably start on the interior where he lined up after Week 4 of the previous campaign. The Alabama product struggled at right guard but also put some solid performances (few and far between) on film as well. 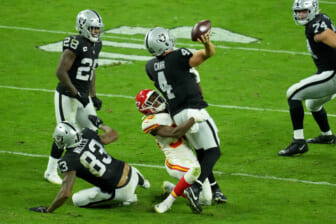 With Eluemunor projected to start at right tackle, Leatherwood moves inside to claim the right guard spot.

In 2018, Tyler Lancaster played for the Green Bay Packers while Graham served as the linebackers coach and run game coordinator for the club. They didn’t work with each other directly, but you can connect the dots between the two, which means the fifth-year pro has a chance to play a decent role on the defensive line.

Graham will likely rotate a handful of defensive linemen with the top three players at the position on the field for 50-75 percent of the snaps, which is what he did with the New York Giants’ front line last year.

Though Johnathan Hankins and Bilal Nichols opened training camp on the PUP list, they’re probable starters within the unit, which leaves the last spot up for grabs.

Vernon Butler and Matthew Butler may square off for the remaining position, pitting the former’s experience against the latter’s upside.

With that said, Butler (the veteran) hasn’t made substantial contributions on the field since the 2019 season, and he’s currently on the non-football injury (NFI) list. Coming off his most productive collegiate campaign at Tennessee (47 tackles, 8.5 for loss and five sacks), Butler (the rookie) can ride that momentum into the summer and win the starting job.

The Raiders signed Demarcus Robinson early in the offseason. Two days after they added Keelan Cole, the front office dealt Bryan Edwards to the Atlanta Falcons. Perhaps that’s a coincidence, or the coaching staff feels confident in the new acquisition at wide receiver.

Over the past two years with the Miami Dolphins, Mack Hollins became a core special teamer, though he also caught a career-high four touchdown passes last season. At 6’4”, 221 pounds, he can present matchup issues for opponents in the red zone but lacks the down-to-down consistency to maintain a sizeable role in three-wide receiver sets.

Cole has shown the ability to produce with a decent target share. As a rookie in 2017, he led the Jacksonville Jaguars in receiving yards (748) and finished second on the team in receptions (55) and receiving yards (642) for the 2020 term. Last year, with the New York Jets, he averaged 16 yards per catch.

If the Raiders want a spark in the aerial attack, Cole can generate big plays as Davante Adams, Darren Waller and Renfrow command heavy coverage. He has a more accomplished resume than Robinson, who hasn’t hauled in more than 45 passes in a single season.