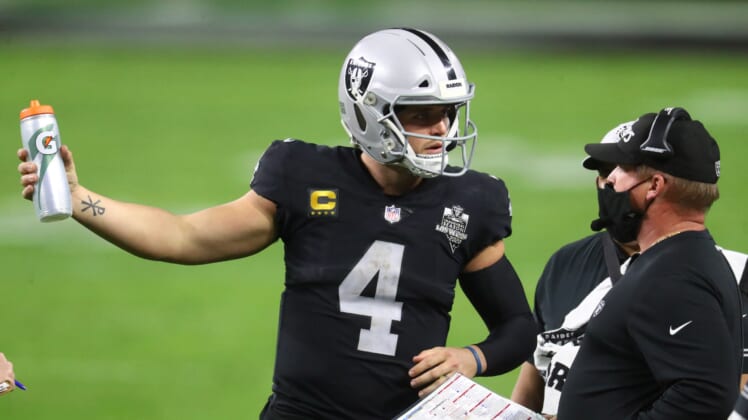 NFL rumors linking the Las Vegas Raiders to a Derek Carr trade took off shortly after they finished up shop on another mediocre 8-8 season. That came after talk in Vegas that Jon Gruden and Co. would retain Carr.

With the offseason heating up big time, talk about a potential Carr deal has given in to rumors suggesting that the Raiders could move backup Marcus Mariota instead.

We now have some more information on this from ESPN’s Jeremy Fowler, which keeps open the possibility that Carr could be calling another NFL city home next season.

“It would take a pretty big haul to pry him away,” Fowler reported on Sunday (h/t Bleacher Report). Previous indications were that the Raiders might net a first-round pick and change in exchange for Carr. Among those bandied about as a potential destination, the Indianapolis Colts seem to make the most sense.

With that said, Las Vegas simply isn’t going to trade Carr for salary cap relief and draft pick compensation. The team would then be in search for an upgrade with Deshaun Watson being talked about on a near never-ending loop in the desert metropolis.

Carr, 29, definitely offers value on the trade block. He’s tossed for north of 4,000 yards in each of the past two seasons and is coming off a solid 2020 campaign. The three-time Pro Bowler completed 67.3% of his passes for 4,103 yards with 27 touchdowns against nine interceptions en route to posting a career-best 101.4 quarterback rating.

There’s a chance that Las Vegas pulls off a Derek Carr trade with the belief that a cheaper Marcus Mariota could be a stopgap option in 2021. The former No. 2 pick is set to count a mere $10.73 million against the cap in 2021 compared to Carr’s cost of $22.13 million. Even then, we’d be hard-pressed to find any objective mind who believes Mariota is an upgrade over Carr.

Let’s look at it this way. The Detroit Lions received Jared Goff, two first-round picks and a second-round by from the Los Angeles Rams in the Matthew Stafford blockbuster. Less accomplished than his counterpart, Carr likely wouldn’t demand as much in a trade.

With that said, he has a track record of success and is playing under a team-friendly contract. Given the NFL salary cap issues brought on by COVID-19, that’s no small thing.

Fowler’s report that it would take a pretty big haul in a Derek Carr trade makes sense in this regard. Las Vegas would likely be looking at a first-round pick, change and potentially a young player in return. It could then potentially get in on the Deshaun Watson sweepstakes.

For now, this seems to be an unlikely scenario.