Up to this point, talks between the star quarterback and his organization have been slow going. There’s multiple reasons for this. Among them, Jackson is not represented by an NFLPA certified agent. Rather, his mother is acting as his handling talks with the Ravens as his “manager.”

Apparently, this has the NFLPA a bit concerned. How much so? The union has attempted to step in and help out. To no avail.

“Lamar Jackson is being represented by his mom, with zero guidance from the NFLPA (the union has tried to assist to no avail) and the rest of the industry has no idea what this contract will ultimately look like, there is zero flow of information about it in the agent community, and that could hold up the process around the league,” Jason La Canfora of CBS Sports reported recently.

Jackson’s mother, Felicia Jones, helped negotiate the quarterback’s rookie contract after the Ravens made him a first-round pick back in 2018. However, things are a tad more complicated than inking a deal under the NFL’s current rookie wage scale. That has apparently held up the process. 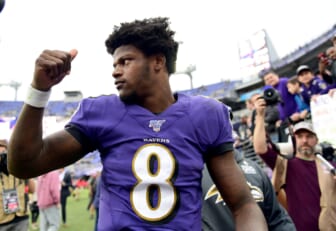 “It is a lot of pressure, unbelievably difficult. The stakes are incredibly high because if you lock yourself into a bad deal you could cost yourself 10s of millions of dollars,” NFL Media’s Ian Rapoport noted last month regarding Jackson’s mother handling negotiations.

It has gotten to the point that some within the NFL agent community have raised eyebrows while showing concern over the situation. For Lamar Jackson and his mother, the idea is rather simple. Take out the middle man and collect 100% of the contract rather than exhausting the norm of 3% to agents. Even then, it’s not a situation to be taken lightly.

The likes of Josh Allen and Baker Mayfield are also first-time extension eligible quarterbacks this offseason. Neither have signed on the dotted line at this point. Whoever makes the first move will likely set the market for the other two quarterbacks. Again, the situation is complicated.

All of this comes after Patrick Mahomes inked a record-breaking extension with the Kansas City Chiefs ahead of the 2020 season that will pay him upwards of $500 million over 10 years. Mahomes is represented by Leigh Steinberg — someone with decades of experience negotiations complex NFL contracts.

“Agents, a lot of times, sort of act as a buffer for teams to players,” Rapoport noted in the above-linked report. “It is a little different with Lamar Jackson because it’s his mom sort of acting as his business partner, business manager.”

The 24-year-old Jackson did see Baltimore pick up the $23.1 million option on his contract for the 2022 season during the spring. Since then, things have been slow going on this front.

Even with Lamar Jackson under contract for the next two years, there’s a major risk that comes with failing to agree to an extension ahead of Week 1. Of course, injuries could play a role in any future negotiations — potentially costing the former Heisman winners tens of millions.

Hence, why the NFLPA and some player-agents are concerned.