Nathaniel Hackett became the latest in a growing list of NFL coaches fired this season after being dismissed by the Denver Broncos on Dec. 26. While an official coaching search won’t begin until 2023, there are already rumors about who Denver will pursue.

Sean Payton is widely expected to be on the Broncos’ coaching radar, but hiring him means a massive contract and trading for his rights with the New Orleans Saints. For an organization that is hurting for draft capital, that makes landing Payton unlikely.

However, there is another emerging possibility for Denver. As the front office and ownership seek a stabilizing force to help Russell Wilson after a dismal 2022 season, a new name has been revealed in the looming coaching search.

NFL insider Benjamin Allbright of KOA Colorado shared that he believes Denver will inquire to see if Michigan coach Jim Harbaugh is interested in the job.

It’s not the first time this season that Harbaugh has been connected to a head-coaching vacancy. He’s reportedly been on the radar for NFL teams since November. However, the leader of the Wolverines’ football program has steadfastly denied interest in making an NFL return.

However, the 59-year-old has publicly spoken about his unfinished business at the highest level in the past. Furthermore, he was a finalist to become the Minnesota Vikings coach right before he signed an extension at Michigan and Minnesota hired Kevin O’Connell.

The better question might be if Harbaugh would specifically want the Broncos’ gig. Wilson is now entering the early years of one of the worst contracts in the NFL and his play has declined rapidly over the past year.

While the wealthiest NFL owner might be willing to offer Harbaugh a salary that makes him one of the highest-paid coaches in football, it’s reasonable to think there will be other teams willing to make similar offers. Harbaugh took Michigan to the CFB Playoff for the second consecutive year and the program appears to be on the rise.

Ultimately, Harbaugh will likely tell the Broncos no and they will move on to a deep pool of NFL coaching candidates in 2023. Considering how poorly things went with Hackett, the only way to go is up from here. 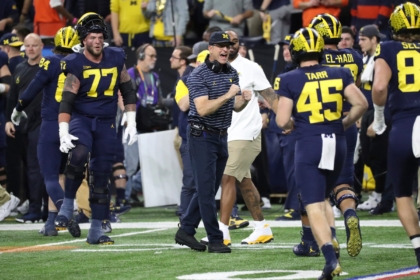