The 122nd U.S. Open at The Country Club in Brookline, Mass. concluded Sunday afternoon on Father’s Day with Englishman Matt Fitzpatrick winning by one stroke over Will Zalatoris.

Despite landing in the left fairway bunker on the par-four 18th hole, Fitzpatrick hit a nine-iron out of the sand and on to the green. He would go on to two-putt for par to win his first major tournament.

Here are four takeaways from the final day of the third major of the season.

The 27-year-old Fitzpatrick, who finished with a six-under 274, has entered rarified air with his major win. He became the first player since 18-time major champion Jack Nicklaus to win the U.S. Amateur and the U.S. Open on the same course.

Related: Players with the most all-time major wins

“Anytime you share a record with Jack Nicklaus is incredible,” Fitzpatrick said. “For me to have that as well is incredible and he called me before the presentation to congratulate me. Coming from someone like that, it means the world.”

In addition to his big save on the 18th hole, he also nailed down a long 48-footer for birdie on the par-4 13th hole to get a share of the lead.

His shot to the 18th green was one of 17 greens in regulation Fitzpatrick hit during the final round, which led to 5.65 strokes gained around the green. That led the field.

Fitzpatrick said his final approach shot on the 72nd hole was a result of positive shots on each of the three holes before.

2. Will Zalatoris inching closer and closer to major title

Last month at the PGA Championship, Will Zalatoris lost in a playoff to Justin Thomas. On Sunday, Zalatoris was once again in the final grouping with the opportunity to reach the top.

However, after hitting the fairway and a shorter approach shot on the 72nd hole compared to Fitzpatrick, Zalatoris could not knock down his 14-foot putt to force a playoff, resulting in another major tournament runner-up finish.

Zalatoris was also a runner-up at last year’s Masters.

Despite two bogeys through the first three holes, Zalatoris bounced back with four birdies in a six-hole span. After his birdie on the 11th hole, he would take a two-shot lead going into the final stretch of holes.

Zalatoris would then bogey the par-4 12th and the par-4 15th holes but regained momentum on the par-3 16th by knocking down a birdie putt to get one back before the final two holes.

The 25-year-old continues to get himself closer and closer to claiming a major championship victory.

Including this weekend, Zalatoris has six top-10s in his first nine majors. In the other three majors, he has two missed cuts and one withdrawl. With the final major tournament – The Open Championship – of the season taking place next month, Zalatoris has the opportunity to begin his quest for a Grand Slam.

If not, then he will have to wait until the Masters Tournament next April.

3. Three Top golfers finish inside the top five of the U.S. Open

Players at the top of the Official World Golf Rankings brought games as well on championship Sunday behind Fitzpatrick.

Tying with Zalatoris was World No. 1 Scottie Scheffler at -5.

Scheffler, who won the Masters two months ago, got the putter firing early by making four birdies in the first six holes. However, back-to-back bogeys on holes 10 and 11 as well as lip-out putts that turned birdies into pars did not favor Scheffler’s chance to win a Masters and a U.S. Open in the same season.

The 25-year-old Scheffler, said he came up one shot short of hoisting the trophy because of putts that could not fall.

In addition to Scheffler, World No. 4 Collin Morikawa and No. 2 Rory McIlroy both finished at -2 and tied for fifth.

One of the best rounds of the day came from World No. 13 Hiedki Matsuyama, who shot a tournament-low 5-under 65. Matsuyama had a bogey-free round and made five birdies, including back-to-back on holes six and seven, as well as 12 and 13, before making his final birdie on hole 16. 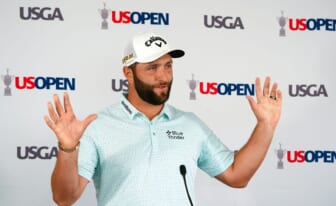 One of the surprise names in the top 10 was Denny McCarthy, who finished at -1 and tied for seventh.

With his top-10 finish, McCarthy gets an exemption into next year’s U.S. Open.

Like Scheffler, McCarthy shot low early, making three birdies in the first five holes. Despite a bogey on 9, he birdied the 12th hole.

McCarthy, who was ranked 121st in the Official World Golf Rankings entering this week, said he competed and could have at or near the top with his putter.

“I played really solid. It feels weird to say, but I felt like it could’ve been a decent amount lower,” McCarthy said. “I hit the ball so good today. Came out with the mindset I was going to try to win the U.S. Open today. I felt like played well enough to do that today. A really good putting weekend away from being right there at the top.”

McCarthy, who recorded his best finish at a major, said he is “proud” of where he is at right now and can not wait to improve at his craft.

“This is a big stage and I’m starting to get more comfortable at these events and I’ll be back for sure,” McCarthy said. “I like where my game is trending and I’m going to keep working hard. I have a really deep drive to get better and this is going to make me even more hungry.”