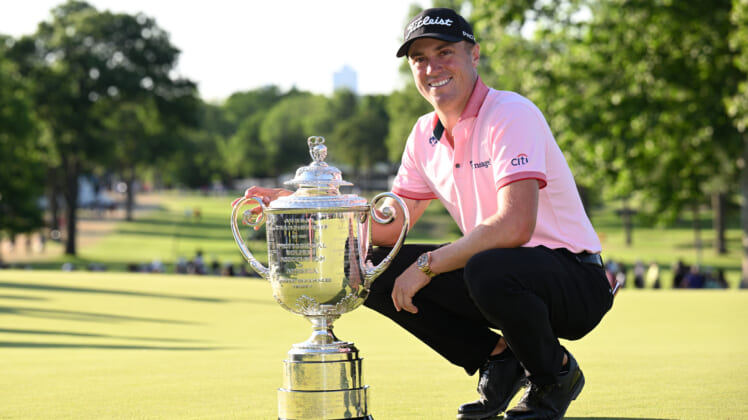 The 2022 PGA Championship at Southern Hills Country Club in Tulsa, Okla. has concluded with Justin Thomas taking home the Wanamaker Trophy, winning by one stroke over Will Zalatoris in a three-hole aggregate playoff.

Thomas, who was at one point was eight shots back of the lead on Sunday, made three birdies on the back nine to shoot a three-under 67 to force a playoff.

“This place is so tough,” Thomas said moments after receiving the Wanamaker Trophy. “It’s funny. I was asked earlier in the week, ‘What lead is safe?’ I said no lead. This place is so tough, but if you hit the fairways, you can make birdies and I stayed so patient. I couldn’t believe I found myself in a playoff.”

Here are four takeaways from Sunday’s finale at Southern Hills Country Club for the 2022 PGA Championship.

With the win, this gives Thomas his second major victory and his second PGA Championship, also winning in 2017.

Justin Thomas, who went minus-6 in the final 13 holes including the three-hole playoff, was going through a putter change this week, first implementing the new club at last week AT&T Byron Nelson when he finished in the top five.

As Thomas was working in his new putter, his iron and approach game was crisp as he led the field in making 70.3% greens in regulation.

One of Thomas’ top shots of the tournament came on the 17th hole in a playoff in a short, 304-yard par-four.

Off the tee, the 29-year-old hit a 3-wood that bounced just short of the green and rolled on to the green setting up a two-putt for birdie and a one-shot lead heading into the final hole of the three-hole aggregate playoff.

Thomas would go on to par the 18th hole and get the win.

2. Will Zalatoris continues to impress in major tournaments, taking PGA Championship to playoff

Will Zalatoris has continued to make a statement on the PGA Tour, especially at major tournaments.

Despite losing to Thomas in the playoff, Zalatoris finished his final round with a 1-over 71 and making a clutch par putt to save par on the 18th hole to force a playoff with Thomas.

This is Zalatoris’ second consecutive runner-up finish at a major championship, including tying for sixth at the Masters in another low tournament. Furthermore, in five of his last seven major championship starts, Zalatoris has finished inside the top-10.

The 25-year-old said getting that first major win is on the horizon.

One of the biggest moments from his final round came early at the par-3 sixth hole when his ball landed beyond the green and went into the bushes because of a surprise wind gust pushing the ball further than expected. After Zalatoris found his ball, he had to take his shot on the cart path with two club lengths to have a better angle than hitting behind a camera tower.

Zalatoris would get up and down for bogey. At the time, it was a big scramble to save bogey and only lose one stroke compared to possibly falling off and getting double bogey or worse.

Although it was early, the sixth hole for Zalatoris defined the type of the day he went through.

“I fought like crazy all day. I really thought I needed to make a few birdies on 12 through 15 and was just barely missing on the edges and speed got off a little bit. I had a lot of putts that were uphill but were breaking about a foot and a half and they’re so hard to hit, especially out here.

Pretty proud of the resolve that I had. I think yesterday was really day I was frustrated with. The first nine holes yesterday was a real good experience moving forward.’

Will Zalatoris on final round performance at 2022 PGA Championship

The PGA Championship was another step in the quest to get a fully heathy Tiger Woods. After shooting a nine-over 79 in the third round, Woods decided to throw in the white flag as he decided to get rest before his next tournament, which would probably be at the 2022 U.S. Open next month.

What hurt Woods is that he played his second round on Friday in the afternoon and with a score that was not as high on the leaderboard. As a result, it meant that he had to play early Saturday morning with not as much time to rest and recover.

The fatigue really set in and there was not enough time for Woods to be ready for Sunday’s round four.

Last month at the Masters, the question was how long could Woods go in his first 72 stroke play tournament since the car accident last year. He answered by grinded through, despite not having the finish he may have had.

As the week went on at the PGA Championship, the question was if Woods could match his mental approach in completing four rounds of golf like he did at Augusta. Ultimately, his health become more important than playing the final round Sunday to save the 15-time major champion for future tournaments, including next month’s U.S. Open.

4. Experience played a factor in deciding the champion

Once again, experience played a factor in deciding a major champion this week.

Thomas, who had won the 2017 PGA Championship at Quail Hollow in Charlotte, N.C. on top of playing in clutch moments such as winning the FedEx Cup the same year as hoisting the Wanamaker Trophy five years ago, had the experience going into the final round as the other competitors above him have not won a major tournament.

“There’s a lot of great players ahead of me, but I know they haven’t won a major before and I know I hadn’t won in a while,” Thomas said entering Sunday. “I remember how tough it was and I remember how tough it is now to win. So, I knew I was going to be nervous and I knew they would feel the exact same thing.”

As players were coming to the 72nd hole on their scorecard, it showed, especially when there is a creek that splits the hole. The creek came into play for Mito Pereira as he entered the final hole with a one stroke lead.

Pereira landed in the water and eventually double bogeyed to not only miss the trophy presentation, but the aggregate playoff.

This is similar to the 2019 Masters when the water at the par-3 12th hole – in the heart of Amen Corner – affected multiple golfers and opened the door for an experienced Woods to win his fifth green jacket.

No matter which major tournament, having experience and the knowledge to play championship courses is key as we saw this week and in previous tournaments.