Will the Indianapolis Colts trade for Malik Willis? Team visiting with star QB

The Indianapolis Colts trade for former NFL MVP Matt Ryan seemed to settle their quarterback situation for at least the next couple seasons.

Colts general manager Chris Ballard made sure to note following the trade that he expects Ryan to be their starter through the 2023 season.

“I wanted to make sure Matt knew that there’s no doubt it’s going to be two years. And I think we’ll go from there. I think we’ll know. I think both parties will know as we move forward.”

That’s why it’s somewhat of a surprise to learn that Indianapolis has opted to use one of their limited pre-draft visits on the top quarterback in the 2022 NFL Draft, Liberty’s Malik Willis.

The more interesting aspect of this is the fact that Indianapolis is not slated to pick until No. 42 when the 2022 NFL Draft comes calling later in April.

As for Willis, there’s a chance he could go as high as No. 2 overall to the Detroit Lions. At the very least, it’s highly unlikely that Willis will fall outside of the top-10.

So, what is the plan here? What are the Colts thinking? Let’s delve into that below.

Will the Indianapolis Colts trade for Malik Willis?

This seems to be a highly unlikely scenario. The Detroit Lions (second overall), Carolina Panthers (sixth), Atlanta Falcons (eighth) and Seattle Seahawks (ninth) all have needs at quarterback heading into the draft.

Even those picking outside of the top 10 have much more assets to offer up in a trade up for Willis. That includes the Washington Commanders (11th), New Orleans Saints (16th, 19th) and Pittsburgh Steelers (20th).

In order for Indianapolis to even have a shot at Willis, it would need to see him drop past the top-10. Simply put, trading up to that area without a first-round pick in the 2022 NFL Draft would likely cost three future first-round picks.

Just look at what the 49ers paid to move up from the 12th pick to No. 3 overall for Trey Lance in last year’s draft.

This doesn’t take into account players Indianapolis could move in order to trade up in the draft. Star guard Quenton Nelson is slated to become a free agent after the 2022 season and has yet to agree to an extension with the team. Star defenders such as DeForest Buckner and Darius Leonard could also be of interest to other teams.

However, we find it hard to imagine that Ballard and Co. will part with any of these three franchise cornerstones. 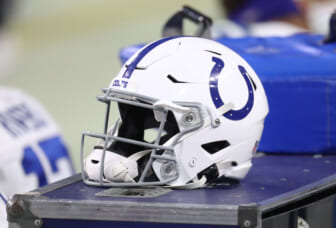 Malik Willis does make sense for the Indianapolis Colts

Logistics aside, acquiring a young quarterback in the draft makes sense. It would lead to a succession plan for a Colts team that is on the verge of its sixth different Week 1 starter in six seasons.

As for Ryan, he’s about to enter his Age-37 season. There’s no telling how much longer the veteran wants to play. He’s only under contract for the next two seasons.

Having a raw Malik Willis sit behind Matty Ice would be an ideal scenario. In fact, Willis couldn’t ask for a better quarterback to work behind in the highly-respected Ryan.

Even then, the Indianapolis Colts’ trade assets tell us a story of a team that’s highly unlikely to be able to make a move of this ilk.