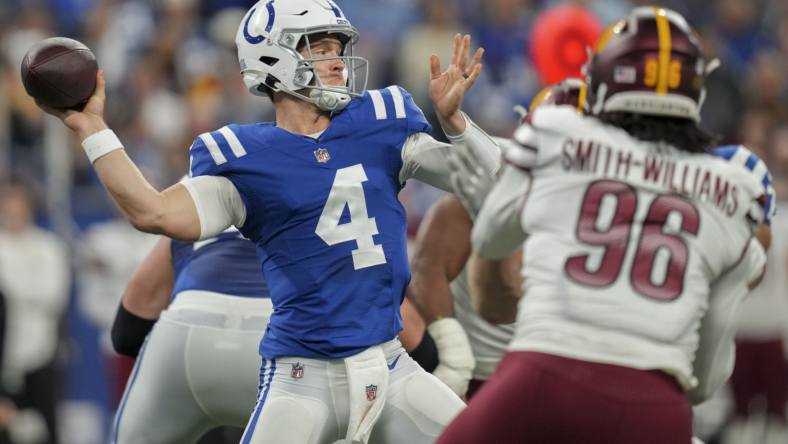 Sam Ehlinger made his NFL debut against Washington on Sunday. It was an interesting debut and something that will be looked at more later on. For now, the Indianapolis Colts are now 3-4-1 on the season. It’s a disappointing effort, for sure. At this point, seeing what the franchise decides to do moving forward will be fascinating.

Coming into this game, it was thought that Ehinger could win in his debut. Washington isn’t a great NFL team. Well, the Colts choked away the victory in surprising fashion. Here are four instant reactions to yet another upsetting Colts loss.

For the 10th consecutive game, the Colts went into the half losing. It is the longest active streak in the NFL. There was hope that this streak would end this week when they faced off against Washington. The next best odds for this streak to end comes in Week 17 against Houston. Hopefully, it ends before then, as the streak would be up to 18 consecutive games.

The ground game does the heavy lifting on the offense

Coming into the game, it was expected that the running game would carry the offense. It’s not fair to make Ehlinger carry the team in his debut. In this game, the Colts lived up to their catchphrase, “run the damn ball.” They 26 times for 126-yards and 4.8 yards per carry, and a touchdown. And it just wasn’t just Jonathan Taylor.

Frank Reich showed some offensive creativity as well. He called a direct snap to Nyheim Hines for a nine-yard gain. He also called a jet sweep for Parris Campbell that gained 28 yards. And not to be left out, Ehlinger also carried the ball five times for 11 yards.

This Colts team is led by its defense. This game was no different. And the Colts’ biggest stars made some of the biggest plays in the game. Bobby Okereke had a big stop in the first half. DeForest Buckner got one of two sacks for the Colts.

Grover Stewart continues his great season. He sniffed out a running back screen play and then followed that up with a pass deflection. Then the man they call ‘The Maniac’ made a huge key play with an interception. Shaquille Leonard didn’t play a lot in this game, but a lot of that was due to his first game being back from injury. The amount of turnovers the man generates is just incredible.

The NFL versions of a closer

One of the most interesting and surprising things about the Colts is their play in the fourth quarter of games. It’s well-documented that the team can’t go into halftime with a lead. Something that is just now starting to get some attention is the team’s performance in the last quarter of the game.

Coming into the game, the Colts had the third-highest scoring mark in the fourth quarter at 55-12. After this game, that mark is now up to 61-21, and it will be interesting to see if they take a tumble in the rankings.

Up next, the Colts will face off against New England. But before that is the NFL trade deadline on Tuesday, November 1st. With this loss, it will be curious to see if the team decides to trade any of their players away or still go for the playoffs.

Related: 5 Indianapolis Colts that should be moved before Nov. 1 trade deadline